Dierks Bentley is currently on a whirlwind tour of down under in Australia, and DB Congress rep Judy and her friend Larissa were lucky enough to experience the Toowoomba and Brisbane shows on March 9 and 10, 2012.  Here's her story!

I picked up Larissa from Gold Coast airport Friday afternoon to begin our road trip to Toowoomba to see two of the best --- Lee Kernaghan & Dierks Bentley. I had received my M&G email a couple of days prior and was feeling very nervous about meeting Dierks. What a nice guy!  I was stuck for words not really sure what I said to him! SHOWTIME!  Lee was out first and was his usual best! The Empire theatre is a seated venue so there were only a few who were up dancing.  Larissa and I were on the balcony, dancing & singing.  Dierks was better than I had ever imagined! 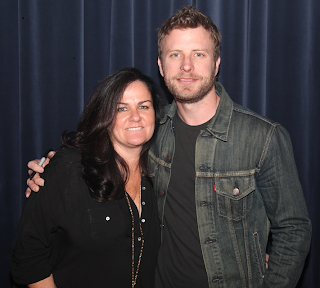 Saturday morning we headed off to Brisbane for the next night's show at The Tivoli Theatre, which is a beautiful old theatre and STANDING! We were lucky enough to catch up with LK backstage before the show.  Dierks was there but I had had my time with him the night before. SHOWTIME! OMG! It went off, the whole place went wild--everybody was dancing, clapping, singing, girls on shoulders of guys -- it was the best crowd I have ever been in.  It was just awesome and Dierks performed brilliantly! What a guy.  He stole lots of hearts that night, especially my daughter Amy, who has only just discovered Dierks.  She can't get him of her mind, a bit like me!

I have seen many artists over the years and had always thought that nobody could match Tim McGraw live.  I was wrong! Dierks Bentley is the man, and I thank him for his wonderful music.  Please visit again!
-Judy xx

Thanks for sharing, Judy!
Posted by DB Congress at 7:29 PM