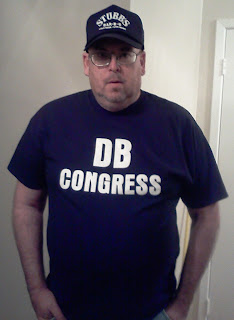 Our two newest Texas DB Congress reps, Dallas and John Olthoff, just received their DBC T-Shirts and are excited to spread the word about Dierks Bentley!  John was happy to tell us about their most recent Dierks experience!

"Dallas joined the fan club in late April, found out she would be off June 16th, so on May 4th, I was online at 10 am to buy tickets (I have internet access at work, she doesn't) to the show at Cynthia Woods Mitchell Pavilion in Woodlands, TX (outside Houston).

I told Dallas the tickets would be at will call, and we would probably be pretty close to front.  I sent her a copy of the map for seats and told her I had no idea where the seats really were.

Dallas had won a Meet & Greet with Dierks through the fan club, so day of show we drove down as the email said to be there an hour before gates opened to pick up her M & G pass. We got there around 11, but the people at the ticket booth told us no passes as yet. So we got our tickets, opened up the envelope and found Pit Row 1 Seats 29 & 30. 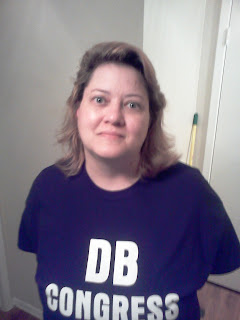 She was excited that for the first time ever she had front row seats.  We kept checking back and they had no idea when the M&G passes would show up. So we checked into the hotel and kept calling the box office until they said passes were finally there and we could get them.

We got some lunch and headed back to the pavilion. Dallas got her pass and put it on. The show was being put on by Houston country station 93Q "A Day in the Country," and we decided to go find our seats after Dallas got a Dierks T-shirt.

The guy at the pit gate told Dallas we had the worst seats in the place.  He led us to front row..."see the mic stand? You guys are right in front of it."  We listened to a couple of artists until time for M & Gers to go back.  Dallas went over what she wanted to say to Dierks (she gets nervous and forgets).  She went back and got in line.

During Ronnie Dunn's set she came back to her seat.  I asked what she had said.   "I told him I was sorry for his losing his dad, that this was my birthday present (June 1st) and was thrilled to be in front row and would he mind waving to me during show." 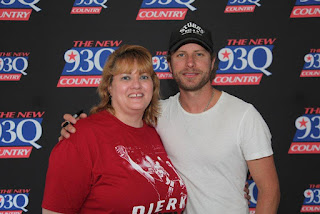 Dierks came out and sang one song, then during "I Want To Make You Close Your Eyes" he came to the front of the stage and held out his hand. He took Dallas' hand and sang a couple of lines to her.  Both of us were kind of stunned (I was taking a bunch of pictures but I was too close and didn't get both of them in the shot--just him kneeling with his arm out...still, wish I hadn't messed up a once in a lifetime shot).

During "Free And Easy Down The Road I Go", he was having people sing along and held the mic down so Dallas could sing the chorus.  He even held it to me. She says how he treated her, meeting him backstage, front row seats made it one of the best experiences in her life.

Later in the show he pretended to take off his sweaty t-shirt (of course thunderous female screams), he asked "so y'all want a t-shirt?" He got out a hockey stick and one of the crew was throwing out rubber banded t-shirts and he kept smacking them out into audience. We waved hands and he sent one towards us. Unfortunately, it got a little sideways and hit her chin and landed on her arm. Dierks immediately ran down front asked if she was alright and was very apologetic. I teased her that he was playing up to her.

I liked Dierks songs and videos before, but wasn't what you would call a fan. Two things during that show impressed me that nigh.  Normally a star will walk off stage and come back for what I call a fake encore (they're going to sing a couple more songs anyway). Dierks stopped and said he was going to go offstage, but if you don't mind we will just keep playing on.

Another thing is his energy and audience interaction.  You see artists point out into the crowd to connect with people. Dierks shook hands, sat on the edge of the stage and talked to people.

I only remember one other guy that treated the stage like the entire thing was his playground as Dierks did that night...Chris LeDoux.

Dierks was going from side to side, no part of the stage was off limits to him or his band. He and his band gave that audience everything they had, and they got it back in equal measure.  You left feeling you had seen a show...not just a concert.

A couple of days later, I was looking up Dierks on the internet. I saw where he had told an interviewer how he was a rock/pop/country guy.  He said when he moved out of an apartment he left everything 'not country' on the counter. That impressed me greatly.

As a country fan of over 40 years, many of today's artists don't like looking back at country that came before. Dierks on the other hands acknowledges it and respects it.  He has said he does a bluegrass song on every album (something I picked up on when we listened to his CDs when we went to Nashville in May). It's his respect for country music, the stars who came before, his appreciation of his fans and what it takes (cost) to go to a show.  He knows it costs his fans and so he gives 100% while he is on stage. That is why within a week of the show, I joined my first fan club ever--the Dierks Bentley Fan Club (DB Congress).

Dierks Bentley is what every country fan wishes for.  Not a celebrity who sings to make money or anything else. But a performer who goes out with the idea that  it takes a lot for fans to be there.  They deserve to be entertained and to get their money's worth.  I can tell you I have a great deal of respect for him  not only as an artist but as a person and a man."
Posted by DB Congress at 12:37 AM