Can You Say, "I Got Drunk On A Plane With Dierks Bentley," In One Photo? 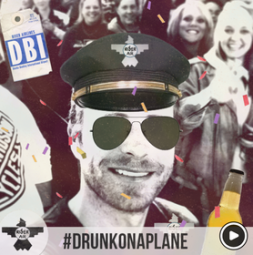 Dierks is taking the mile-high party viral today with the release of a “Drunk On A Plane” interactive photo booth, where fans can upload their own picture and customize it with aviation and party themed stickers.

To join the party visit www.dierks.com/drunkonaplane, on Facebook at www.facebook.com/dierksbentley and through Urturn in the AppStore.

“Nashville’s Freshest, Funniest Party Song” (Star Tribune) is the second single off Bentley’s No. one album RISER and follows its chart-topping lead single “I Hold On.” Fans can catch Bentley out on his headlining 2104 RISER tour beginning May 9 in Charlotte, NC.

You've done a great job campaigning for "Drunk On A Plane," so far congress!   Through your efforts, the single is already up to #45 on Billboard this week!  Stay tuned for Carrie's full Chart update soon!

Keep requesting through your favorite radio stations and DJs!