Dierks and Kelly on Tulsa Time 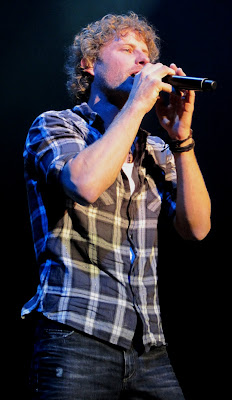 Can the gray plaid shirts of Dierks and Kelly match any better? The Oklahoma DB Congress rep shared her picture with Dierks and experience at the Meet and Greet at the Hard Rock Casino in Tulsa, OK November 6, 2010.

"This was my second time to get to meet him and he was as nice as ever. I almost didn't get to make it this time. I just had a sweet and wonderful baby boy in August. People tell you babies are expensive but you really have no idea until you have one. When I saw the tickets go on sale for the show I instantly signed up for the meet and greet and planned on buying the tickets later. Well every week the tickets got put off for baby stuff.

The week before the concert I'd decided I wasn't going to be able to afford to go and I hadn't heard if I'd been accepted for the meet and greet. Then three days before the concert I got the email from the fan club telling me I'd been chosen. I was so upset! I vented to my friends and family but knew I would survive LOL Then through the kindness of some wonderful people in my life they surprised me with tickets and said go! I was so, so ecstatic.

My husband and I showed up at the casino and got my meet and greet pass then went to stand in line. I visited with Karissa (who also has a baby on the way--congrats!), another fan club member I'd made friends with at the last meet and greet. We waited for a few minutes then Dierks came out. He thanked us all for coming and for being in the fan club. When it came my turn he asked my name and we chatted for a minute. We got our picture taken together. Then he signed my son's little cowboy boot. He said it was the cutest little boot he'd ever seen. Everyone else got their turn for pictures and autographs. He stood around with us for a few minutes talking about how excited he was for the Country Music Awards and told us they'd be practicing for it during our concert. Also he talked about his new baby on the way. 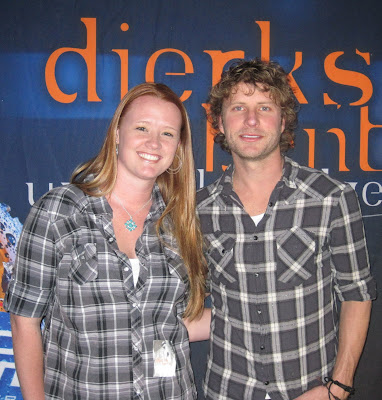 The concert was awesome! He opened with "Up On The Ridge" and everyone went nuts. We were in the pit in front of the stage, just a few feet away from Dierks. Song after song we just cheered louder and louder. We made some great new friends also. During "Fiddlin' Around" a fight broke out! I don't know how many people ended up in it but it was a bunch! Dierks just kept on playing! I was excited when he played my all time favorite, "Settle For A Slowdown."

As usual it was an hour and a half of incredible music! This was my seventh Dierks concert and I plan on going to many more. Hopefully soon I can take my little guy. I was two months pregnant the last time I saw him so technically Dierks Bentley was his first concert.

Thanks, Fan Club, for giving me another amazing opportunity to meet my favorite singer!