Dierks Starbucks Pick of the Week! 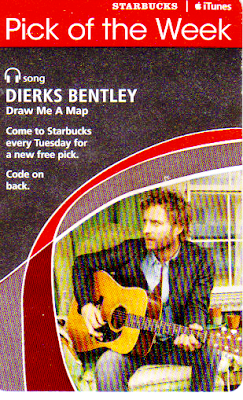 A few weeks ago, Dierks Bentley's "Draw Me A Map" was the Pick of the Week at Starbucks! Even though I go to Starbucks every morning, I long ago stopped picking up the free itunes POTW cards since they never featured country artists. But then one day on Twitter, I saw a tweet from Arizona Harley that DB was the POTW! I drove to my local Starbucks the next morning and all the cards were gone, so I asked the manager, Ariel (yes, we're on a first name basis and my name to her is Grande Skinny Caramel Latte). She started to pull out a supply to refill and it was some other band. I said, "No, I want the one from last week for Dierks Bentley." She said "Yeah, those went fast, but hold on..." She went to the back room and came back with one in her hand. "You can have mine," she said. Well that just made my day--and affirmed my loyalty to Starbucks! I told her it wasn't like I didn't have several copies of the album, but this would be a great souvenir!

Email ThisBlogThis!Share to TwitterShare to FacebookShare to Pinterest
Labels: Dierks Bentley, Draw Me A Map, itunes, Pick of the Week, Starbucks