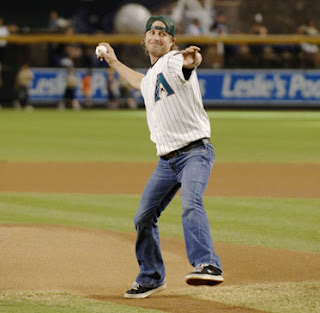 Nearly five years after Dierks Bentley throws out the first pitch at an Arizona Diamondbacks game on June 14, 2006, he will trade in his hockey stick and guitar pic for a day to play softball to strike out cancer.

"We are just starting to get the word out about this fantastic event and one of the ways we are doing that is by our “Connected to Hope” initiative, Phil Kiczula with City of Hope tells DB Congress.  "In an effort to create an online community of support City of Hope has launched “Connected to Hope” as a place where anyone touched by a life threatening disease can come for sanctuary and find strength knowing they don’t have to take this fight alone. To kick off this initiative City of Hope has sweetened the deal offering someone submitting a story the chance to take the field at the event and play ball with the celebs."

Celebs will take the field for the highly anticipated game between longtime rivals Grand Ole Opry and After MidNite with Blair Garner.  Am I the only one who wonders which team Dierks will play for?  He's a member of the Opry AND he's good friends with Blair--in fact I just listened to BG's 2008 interview with DB on my ipod this morning!  Coincidence?

All the details about the game and participating stars are here.

And all the information about the Connected to Hope initiative can be found here.

To purchase tickets to the most fun-filled game in town, click here.  All ticket sales benefit City of Hope.

"Hope" to see you all there!  Look for us along the first base line seats!