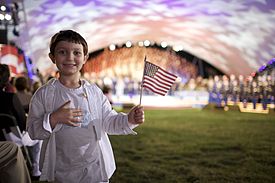 Does the Memorial Day holiday signifiy the start of Summer or remembering our US Military who died protecting us ordinary people? You decide.

Memorial Day is a United States federal holiday observed on the last Monday of May. Formerly known as Decoration Day, it commemorates U.S. Service Members who died while in the military service. First enacted by an organization of Union veterans — the Grand Army of the Republic (GAR) — to honor Union soldiers of the American Civil War. It was extended after World War I to honor Americans who have died in all wars.

Memorial Day often marks the start of the summer vacation season, and Labor Day its end.

Begun as a ritual of remembrance and reconciliation after the Civil War, by the early 20th century, Memorial Day was an occasion for more general expressions of memory, as ordinary people visited the graves of their deceased relatives, whether they had served in the military or not. It also became a long weekend increasingly devoted to shopping, family get-togethers, fireworks, trips to the beach, and national media events such as the Indianapolis 500 auto race, held since 1911 on the Sunday of Memorial Day weekend.[3]

The preferred name for the holiday gradually changed from "Decoration Day" to "Memorial Day", which was first used in 1882. It did not become more common until after World War II, and was not declared the official name by Federal law until 1967. On June 28, 1968, the Congress passed the Uniform Holidays Bill, which moved four holidays, including Memorial Day, from their traditional dates to a specified Monday in order to create a convenient three-day weekend. The change moved Memorial Day from its traditional May 30 date to the last Monday in May. The law took effect at the federal level in 1971. The Veterans of Foreign Wars (VFW) and Sons of Union Veterans of the Civil War (SUVCW) advocate returning to the original date, although the significance of the date is tenuous. The VFW stated in a 2002 Memorial Day Address:


Changing the date merely to create three-day weekends has undermined the very meaning of the day. No doubt, this has contributed a lot to the general public's nonchalant observance of Memorial Day.[7]

Many people observe Memorial Day by visiting cemeteries and memorials. A national moment of remembrance takes place at 3 p.m. local time. Another tradition is to fly the flag of the United States at half-staff from dawn until noon local time. Volunteers often place American flags on each grave site at National Cemeteries.

What do you think, congrass?
Posted by DB Congress at 1:02 PM