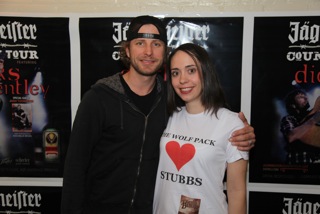 Please welcome guest blogger and "Wolf Pack" member, Stacy Baker, DBC rep in Michigan.  We told you about the Wolf Pak back in February when Dierks was streaming his recording process live from the studio in Asheville, NC.  The fans online watching and chatting were dubbed "The Wolf  Pack," and apparently they are showing up in Meet and Greets with special shirts, like Friday night, May 6, at the Fillmore in Detroit.

"This was our 3rd show this past year, and also my 3rd time with a meet and greet. My husband, Bill, won one but being the great guy he is, he gave it to me. This was the first time we both got one.

The night started out with us seeing Dierks driving his famous jeep down Woodward Ave. It was pretty cool. He waved to everyone and parked it between the buses. Anyway, I decided to make a "Wolf Pack" shirt to wear to the concert. It said "The Wolf Pack "hearts" Stubbs [Dierks' nickname]". Right away when it was my turn, Dierks said how much he loved my shirt. He remembered me from our last meet and greet, which is always nice and shows how thoughtful he is with his fans. He said that the Wolf  Pack was showing up everywhere on the tour. He mentioned something about putting the Wolf Pack in the new album's liner notes.

I had brought a picture for him to sign, so I could hang it with my collection, but I almost wish I had him sign my shirt. I was expecting the "Stacy, God Bless, Dierks Bentley" standard signature, which is what I have always seen him do. But instead he mimicked my shirt and said "Stacy, I love my Wolf Pack, Dierks Bentley". I didn't even realize he had signed it different until I got home. I was too nervous/excited at the time. He told me two more times before we left that he loved my shirt and thanked us all for the Wolf Pack support. He pointed out "camera guy" as well, so I got to say hello to him, too. It was such a great night.

The concert was amazing (of course). He stopped in the middle and said he was going to go off the setlist and do a special song. So it was just Dierks and his guitar singing "Line No. 7," which he wrote about Detroit for Esquire magazine [Available on itunes]. It is such a great song and felt like such an intimate moment between Dierks and our city. He kept saying how nervous he was to perform it, but he did great.

I twittered about it later: "Line No. 7-wow...that's all I can say. Awesome song and crazy, crazy night." A little while later my husband said, "Dierks just re-tweeted you!"  I didn't believe it at first, but sure enough he replied back with "MOTOR CITY ROCKS! Bouncing off walls."

Needless to say, that was a great ending to a great night. Looking forward to seeing him in Nashville next month!"

Steve Wiseman posted some awesome pics he took of Dierks from the show on the WYCD website.  Here are a few below.  Click here to see all the photos. 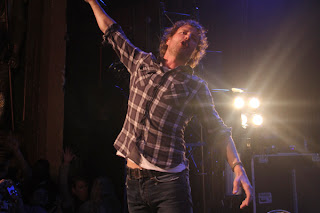 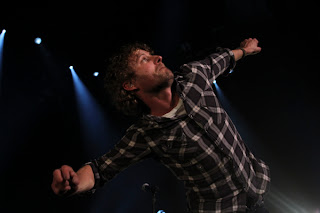 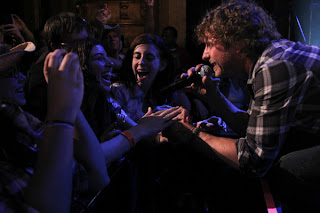 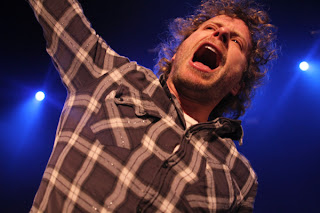