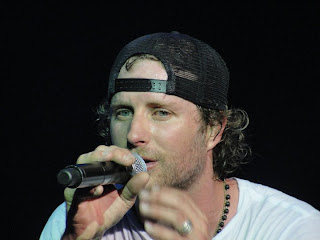 Photo Credit: Carrie/Michael Srebro - Norfolk, VA May 13, 2011 (The Charleston show lighting made for not so great photos!)


"May 12th 2011 is a night I soon won't forget. The Jagermeister Country Tour with the incredible Dierks Bentley finally rolled into the South Carolina low country and I was ecstatic to be seeing Dierks for a second time! Last time I saw him was in 2009 when he did a show with Darius Rucker here in Charleston, SC. It was an outdoor show and was raining the whole night. That night though was the night I fell in love with Dierks, his music, his hair, and his show so when I heard Dierks was coming back I knew I had to go!

I attended this show with one of my mom’s friends and had fantastic seats, first row of riser seats in the section right next to the stage. The show started out with a new band from SC The Piedmont Boys, followed by the very high energy and fun Miss Willie Brown! Josh Thompson got the crowd on their feet along with MC Rick Monroe.

All the warm up acts were amazing and a lot of fun but finally it was time to see the man I had been dying to see all night, Mr. Dierks Bentley. Dierks started the show with Sideways which immediately had me and the crowd up and dancing and singing right along! Soon followed Every Mile A Memory which will always be one of my favorite songs from Mr. Bentley. I think everybody can connect to this song. Before he sang Settle for a Slowdown (another one of my all time favorites) he explained how the song was based off of a true story and later on how the story related to one of his new songs as well.

Throughout the night I was dancing and singing along to every song and often held up my DB Congress sticker to try to get his attention. He pointed at it once at one point in the show. I love how Dierks always gives the fans what they want and talks to us like we are his friends and not just fans. At one point he talked about how if we ever saw him riding around in Nashville that we were more than welcome to jump in the back of the truck with him.

During the middle of the show he had what many call his “Bus Back Lounge” section of the show where he played bits and pieces of songs he and his band often play on the bus after shows.

Towards the end of the show he played Come A Little Closer and brought up Kate Mosson to come up on stage with him. It was one of the highlights of the show. During the time on stage Dierks went and sat at the back of the stage and left her alone on stage. It was hilarious and I could tell he thought it was as well. 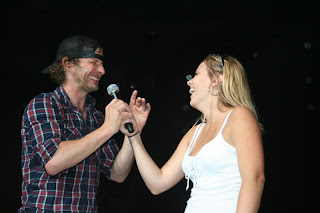 Watch the video below as Dierks starts across the front row - holds hands with Lissa (DBC rep) in the blue plaid shirt, then goes against the norm and points to "the girl in the little white tank top" up in the stands and says, "You gotta come up here."

"I would like to say Dierks really made my night and I was honestly never expecting to be called on stage," Kate said.  "He made my year.  I hope next time I will be as lucky!"

Overall the show was incredible!  I had a fantastic night with incredible country music and one incredible artist!  I love how country music is one big family, which is clear at concerts. Dierks is an absolutely fantastic artist, performer, musician, songwriter and person all around! I could not have imagined spending last Thursday night at the Jagermeister Country Tour with any other artist!"