"Home" Moves Up on Charts 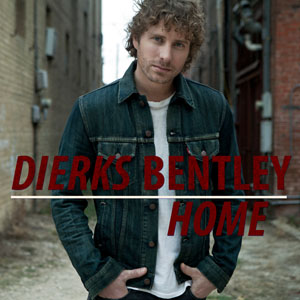 "This song is really well written in that it's well crafted and has a patriotic theme that doesn't get in your face. Great song."
-Greg Cole WKCQ - Saginaw
In the week before its official add date, Dierks Bentley's latest single "Home" had another strong week at radio. The patriotic song was the third-most-added song of both the Billboard (15 adds) and Mediabase/Aircheck (29 adds) reporting stations. In its 2nd week on the Billboard chart, "Home" jumped 12 spots to #41 (edging the new one from Brad Paisley by a mere 1,000 audience impressions!). On the Mediabase/Aircheck chart, "Home" debuted at a very strong #46. The song continues to perform well on the small-market stations as well, moving to #31 on Billboard's Indicator chart, and #36 on the Mediabase/Aircheck chart.

This past Monday, October 10th was the official add date for "Home." Now is the perfect time to start reaching out to your local stations and requesting the song (that is, if you haven't already). "Home" is definitely going to move into the Top 40 next week, which will be a great catalyst for even more stations to add it. And if tonight on Yes.com is any indication, the song is really starting to pick up!