Roger Waters was so moved by Dierks Bentley's cover during Pink Floyd week on the Jimmy Fallon Show, Roger wrote a note on his facebook page to thank all the musicians who performed covers, including our DBC prez, Dierks Bentley!

"Wish you were here!! Dierks, I was truly moved. I loved the fiddle, the pedal steel, you sang it beautifully, Hank Williams would have been proud of you."

Now THAT's a thank you!  Rumor has it DB has recorded "Wish You Were Here" for the Pink Floyd tribute album. We'll try to confirm that, so keep checking back for further details.

One of our very own DB Congress Reps was able to experience that night live and in person!  Read Monica's story here:

"Thanks to DB Congress I found out the Dierks would be on Late Night with Jimmy Fallon on September 29, 2011. Since I would be in the area, I applied for Band Bench tickets, which allow you to go onstage and stand on risers behind and beside the band. The day before the taping I got a call that I had won tickets! I flew into New York on Thursday morning just to go to see Dierks!

My friend Deanna and I arrived at 30 Rock at 4:00 pm to get our wristbands. We lined up with the other lucky Band Bench winners. Finally it was time to go inside. The first guest was Melissa McCarthy and we received her Bridesmaids DVD. Next up was Steve and JoAnn Ward, a mother and son who have a reality dating show, followed by famous photographer Mick Rock.

Then it was time to go to the stage for Dierks. I was on the stage left riser. I could see the stage door and was so excited when Dierks took the stage. The view from behind was a little different from being in the front. After the song, Dierks turned around and thanked us. The band left the stage and the show was over.

But then the stage door opened and they came out again! They were going to do another song! They taped “Home” to be used for another show. Once again Dierks turned around and said ,“Thanks!” The drummer (Steve Misamore) handed a drumstick to me and another lucky audience member. I also was able to get one of Dierks guitar picks.

We also got lucky and ran into Dierks and the band as they were leaving. Dierks took a few pictures and I told him I was part of DB Congress and he stopped to take a picture with me!" 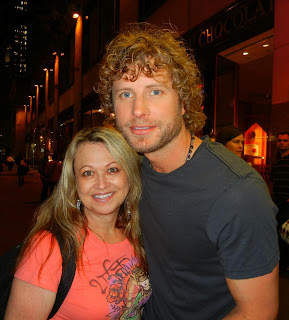 
Watch the video again of Dierks and the guys singing, "Wish You Were Here".  Dan's fiddlin' gets me every time!