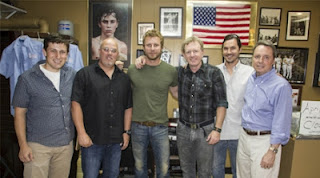 Dierks got to celebrate another Number One this week in Nashville!  'Home' topped the charts, making this his 9th number one party!  Great job, Congress!

"I've been coming here [Arnold's] since about 1994 or '95," Dierks told the assembled crowd. During a time when he was going through a rough breakup, and losing weight in the process, Dierks revealed that he ate at Arnold's nearly every day for three months. "They saved me," Dierks said.

Dierks added that "Home" was "a special song," while conceding that he wasn't sure if it would hit the top. "It had so many layers," Dierks told reporters after the ceremony. "It was just a different type of song."

When he performs the song in concert, it takes on a communal feeling. "It's a song that seems to bring the whole crowd together," Dierks noted. "I feel really blessed to have this, and to have it go all the way to No. 1 is really cool." This marks the ninth No. 1 single for Dierks.

Dierks hosted the lunchtime event for media and industry members and celebrated with one of the song's co-writers, Brett Beavers. Co-writer Dan Wilson was unable to attend.


Dierks sent thanks to radio and fans, and shared his pride via Twitter:

"we had our #1 party for "home" yesterday at Arnold's (best meat and 3 in nashville!) want to say special thanks to Country Radio and Fans..."


"..the guys and i feel lucky to get to sing and play that song every night out there and feel the groundswell of pride it stirs up. thank you"

Thank you to all the Congress members who supported this single!!  Keep calling, texting, and tweeting to support our next endeavor, 5-1-5-0!  Can we make 10 number ones??  I think we can!