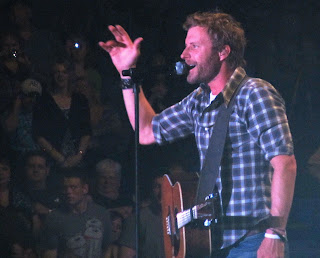 Not many artists reply to tweets, much less give away tickets to shows via Twitter.  That's what separates Dierks Bentley from the pack.  Read how he made one fan's day quite possibly one of the best days of her life.

About two hours away from the Dierks Bentley's May 5th show at Indiana University of Pennsylvania (IUP), Cassidy Norris was working in Pittsburgh and tweeting her friend about how sad she was that the

Dierks show was sold out.

"All of a sudden I saw my phone's screen flash, 'mentioned by Dierks Bentley.' I am pretty sure my heart skipped a beat or two.  He tweeted me saying, 'there's always room for one more! leaving 2 tix under your name.' 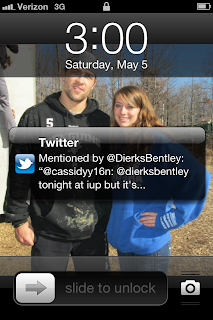 I was at work, and I was shaking so badly from excitement my boss let me leave early and I was on my way to the Dierks Bentley concert!  My friend Jasmine Sable and I had a two hour journey, but we managed to make it in less than an hour and a half.  The entire time we were paranoid that this was a big joke.  But when my friend tweeted to me and Dierks thanking him for the tickets and he said, 'enjoy,' we knew it wasn't!"

"When we got to IUP we had no clue where to go,  but found Will Call and our tickets.  Our seats were AMAZING - 5th row!

The concert was quite possibly the best concert I have ever been to!  I will never forget the day of May 5, 2012 and the most amazing concert ever.  My favorite moment was probably getting the tweet back from him or the fact that he was singing our way and I basically made eye contact!  It was one of the best days of my life!"

This was her first Dierks concert, but we're betting it won't be her last! She's interested in joining the fan club, too!  DB Congress would be happy to have you, Cassidy!

Thanks for sharing your story!