It got a little crazy at the Big Nasty ATV Park in Bloomingdale near Savannah, GA on Sunday, April 29th! Dierks Bentley was filming his music video for his new single, "5-1-5-0."

After seeing Dierks perform just 45 minutes north the night before in Beaufort, SC, a few of us "5-1-5-0 girls" (DB Congress) decided to take a drive down to the site in case it was an "open set" for the video shoot.  It was!  In fact, there were probably about 100 people there who were regulars at the park, already mud boggin' it up in the hot sun!

Luckily, we were under the shade of a covering, right next to the food table.  So we were able to say hi to the guys in the band as they trickled in one by one.

Talent was selected from the Halo Talent Group, a full service model and talent agency offering opportunities for singers, actors, dancers and models in the Savannah community.  A few weeks ago, Halo announced the casting opportunity on their website, looking for males and females that LOOK between the ages of 20-28 years old. On Thursday, they introduced the five models chosen for the all-day video shoot.

"After more than 70 submissions and a Yahoo email crash, the selections are in. The producers of the Dierks Bentley “51-50″ music video have selected the following models. Congrats Halo and Halo Models! Jay, Marshall, Caroline, Sunny and Mandy."


Jay, is THE Jay Byars from the hit TV show, Survivor: One World. He tweeted on his way to the video site:

Of course, @DierksBentley was tweeting throughout the day as well.  Here are a few: 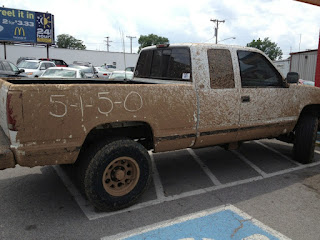 Today, Halo posted a video and some photos from the shoot.


"It was a hot day of mud slinging and mud boggin’(we just learned that term). Our three gorgeous girls and two handsome guys were front and center while filming with Dierks. It’s not every day you book a modeling gig that allows you to stand up and dance in the back of a Jeep. Dierks’personality made bearing the heat, well, bearable. He is as kind as he is good looking."


In an article by savannahnow.com, they posted a video and some photos. 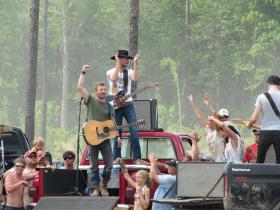 "A cool, fun party atmosphere is precisely what videographers were trying to capture," said John Burke, the Nashville, Tenn., producer in charge of the shoot Sunday.

The next part of the shoot — (took place today at Roebling Road Raceway) — will feature a staged police chase, Burke said. Burke said coastal Georgia was chosen for the shoot because Bentley is touring on the East Coast and [played] a show Saturday in Beaufort, S.C., followed by a couple days off, the Big Nasty’s mud pit seemed perfect.

“This is awesome,” Burke said. “This is fun, but (producing music videos is) always stressful.”

The jeeps and ATVs had cameras hooked up to them for their mud runs. 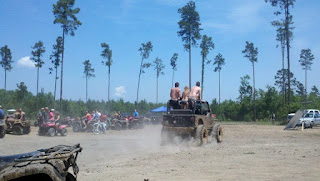 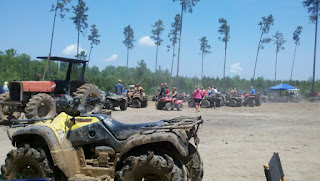 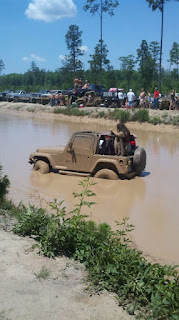 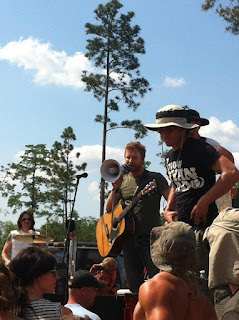 The 5150 music video is expected to premier in about a month.  Keep checking back with us here on dbcongress.com!
Posted by DB Congress at 12:06 AM