It is a well known fact that hardcore Dierks Bentley fans will follow him anywhere.  And last weekend was no exception.  Eleven DB Congress reps from five states (FL, SC, NC, IN, DE) convened in Beaufort, South Carolina Saturday, to show our support for Dierks and his new single, "5-1-5-0," that's chugging up the charts like a Chesney song!

The 'Throwdown at Fightertown' concert was in the middle of  "the woods," at the Marine Corps Air Station. According to Hannah Morris, "not only is the air station responsible for our daily and nightly Sounds of Freedom, it provides a large amount of local jobs in the area, helping our small town thrive." 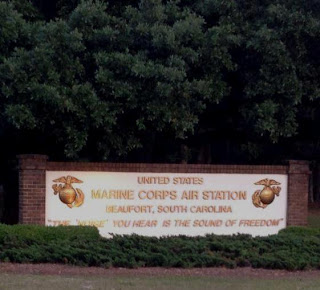 LtCol Gray walked on stage to thank everyone who had a part in making the event possible, and told us he had spoken with Dierks backstage and that he knew Dierks had a special place in his heart for the men and women who keep our country safe, and that it was evident, as he quoted the lyrics from Dierks' recent number one single, Home, "This is still the place that we all call home." The mostly military crowd went wild!

"Special lighting and effects made concert goers feel like this event was larger than life; easily comparable to big city efforts," Hanna continued. "With both his father and grandfather serving in the Army, Dierks continuously mentioned the special place in his heart for Service Members and their families; making the crowd feel sincerely blessed."

One military wife in the audience is also our newest member of the DB Congress! Meredith (SC) and her daughter enjoyed their first Dierks concert and her first fan club meet and greet!  She wore her new DBC T-Shirt proudly and he autographed it for her and asked her about her tattoos. Her husband is stationed in Afghanistan and will be home for two weeks in June but then has to go back until September.  What a sacrifice our military families make to be without their loved ones so we all can be safe and free! Thank you! And welcome to the Dierks family!

"@dierksbentley was great meeting you! Had a fab time! My inauguration into @dbcongress The show rocked!"

Since the show was on base, concert-goers also has an opportunity to see various military vehicles on display. Later Dierks told the crowd he had explored one of the cockpits and admitted to having his own pilot license (although he knew he didn't compare to the air force pilots).

Will Hoge opened for Dierks, and for those of you who had the honor of attending the February 2nd Ryman show, you know how powerful his voice is--and Saturday night was "blow-me-away" perfect. He told the audience as a performing artist you try to come on stage and "look cool," but being in the middle of all those military heroes it was nearly impossible. His set included many of the songs from his newest album, "Number Seven," including "When I Get My Wings." He introduced the song by telling a story of a couple who had been married 60 years and the husband had served his country, and the wife died. Heartwrenching performance. If you ever get the opportunity to hear Will live--GO! In the meantime, buy the CD on itunes! We each took photos with him afterward and he was so appreciative.


Later, a tweet from ‏@WillHoge: "just so we are clear: marines are bad ass. Semper Fi......and thank you!"

As soon as the sun went down, the temperature went up as Dierks and the guys hit the stage!  We had been waiting front row for hours, with our 'painted toes and our flip-flops' and our "5150" little white tank tops.

The first song in the set was "Country and Cold Cans" followed by "Feel That Fire."  We didn't expect it so soon so we were scrambling to get our prank ready.  We each held up 8 x 10 photos of bass player, Cassady Feasby, from his "beach scene" in the Australia DBTV episode. Dierks and the guys were squinting to see what we were holding and then started laughing. Dierks grabbed Sandra's photo and set it up on Dr. Feasby's mic stand. Ryan, the camera guy, was on the other side of the rail snapping away photos of our craziness.

As always, Dierks found a way to connect with all areas of the audience--even in the back.  But all throughout the concert, the DBC got lots of love from our president--nearly every song.  Such as: "How Am I Doin'?" (I keep my friends with me...) when he gestured a circle around us; "Sideways," (I can see you came to rock in your blue jeans and white tank tops) and of course the LWTT reference in "What Was I Thinkin'."

But the highlight for us was "5-1-5-0."  We were singing at the top of our lungs and a certain pair of pink fuzzy handcuffs (5150 is police code for criminally insane) found their way on stage, along with a leopard bra, which Dierks picked up gingerly with his guitar.

There was not an inch of the stage that Dierks didn't stand, jump, sit, kneel, lay or take a bow on. 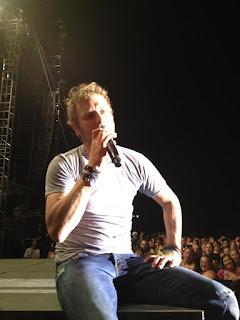 All photos by Carrie Srebro

For Settle For A Slowdown, Dierks added a verse of  "I'm So Lonesome I Could Cry," which fit perfectly with the song's rhythm and melody--a nice tip of the hat to Hank Williams. At one point he sang a tribute to his dad, with "Your Cheatin' Heart," featuring the talented Tim Sergent on steel guitar.  It was nice to have "Trying To Stop Your Leaving" back in the set list--yet no red guitar this time.  Instead Dierks used his trusty Martin with the hole in it to start the song. Sounded sweet!

The crowd was really into every song, but none more than Carolina stars in a purple night, during "Every Mile A Memory," and of course, "Home" got a huge roar of approval with its strong USA theme.

Once the encore (Tip It On Back, Sideways and Thinkin') was over, we stood our ground and picks were thrown and landing in the grass out of our reach over the rail.  It was funny to see marines in uniform crawling on the ground to grab all the pics and hand them to all of us hanging over the barricade.  I even ended up with a drumstick--first one ever in 8 years of DB shows!

After the show, the po-po (police) kept telling us to go to our cars, but we were told by the stage manager, Jay, to wait, so we did, and then Dierks' manager Tom came out and said, "If you're wearing a 5-1-5-0 tank top come with me, Dierks wants to see you. ONLY if you have a 5-1-5-0 tank top on." I forgot to mention not one of us got a meet and greet through the fan club, so this was a nice surprise that Dierks requested it!

We were escorted behind the stage and Dierks said hi to us, then said, "I'll be back in a few minutes." We thought he was talking to us, but he meant for us to follow him--so we did! He lead us around to Big White (his truck), which was up on a flat bed, ready for the 5-1-5-0 video shoot the next day (more on that in the next blog!). He kept saying he couldn't believe we were all there--together--from 5 different states, and couldn't thank us enough. He got the biggest kick out of our shirts and we explained we each had a different line from the lyrics on the back so he wanted Ryan to get a picture of that, too. We asked if we could take pictures with our own cameras and he said, "of course, that's the idea!" and kept making sure Ryan took picture with our lone camera (Carrie smuggled hers in) and iPhones. He also mentioned that he loved the prank on Cassady. 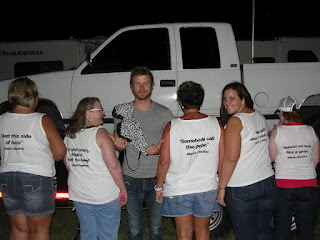 After all the picture taking and hugs, Dierks told us to tweet him copies of the pics, and Tom escorted us back (referring to us as the "5-1-5-0 girls.") We saw Tim and Cassady and they said hi to us. We stopped to talk but Tom kept us moving, so Cassady came out with us and took pictures and chatted. Cassady asked Carrie for the rest of the pictures from his prank, too, which she happily turned over! He said he was sure we'd see them turn up somewhere in the future.

After that, the po-po insisted that we leave, so we reluctantly said goodbye to Cassady and headed out to grab a bite to eat. Pretty much all of Beaufort had been at the concert, and pretty much all of the concert-goers were at IHOP--there were Dierks Bentley t-shirts everywhere! The hostess and our waitress asked us all about the show, and we gave the kids at the next table DB Congress wrist bands. After an impromptu "5-1-5-0" sing-along in the parking lot at midnight, it was time to part ways. Sandra and Kathy had to head back to Charlotte so Kathy could catch her morning flight out - so sad to say goodbye to our friends!

But the comment we kept coming back to was "yeah ... that just happened." As always, every mile was truly a memory, and we made a lot of 'good remember-whens, right up to the end.'