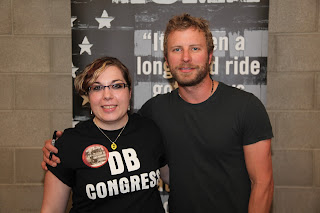 When the Montana DB Congress rep wore her new Dierks Bentley Congress (fan club) shirt to the Missoula show last Thursday at the University of Montana, she had no clue it would land her an interview.

"I just wanted to inform you that there is an awesome article about our president, Dierks Bentley, at Missoula up on their web site . It mentions how awesome he was (oh and a little about me sporting my DB Congress T-shirt!)"

She was being a little modest, because the article did a little more than mention her:

"Lara Hatch proudly sported a “DB Congress” shirt to the concert. Hatch holds the title as the first Montana “representative” in Bentley’s official fanclub – the “DB Congress” – and was one of a few lucky fans who got to meet Bentley backstage Thursday night.
She wasn’t sure what she’d ask him – “This is a fly by the seat of your pants thing,” she said – but she did have a poster for him to sign. When Hatch met Bentley before his last concert in Missoula, he told her he had hiked the “M” in flip-flops and looked around the Montana Harley-Davidson shop."

"The highlight for me," Lara admitted, "was the fact that I haven't seen Dierks in a meet and greet since 2008 and he actually remembered who I was and said he was glad to see me!  It was an awesome concert and the crowd even gave him a standing ovation!  I'm just happy to share ( as well as other fan club members) the love we share for our president Dierks."

Thanks for sharing, Lara! You represented DB and the DBC well in Montana!
Posted by DB Congress at 10:44 PM