Vinyl album sales are up 20% over last year to date, and Dierks Bentley was a guest of honor, performing in the fifth annual Record Store Day today at Easy Street Records in Seattle, Washington.


Although he was only one of hundreds of bands performing in record stores across the nation, Dierks featured special guests such as Mike McCready from the legendary band, Pearl Jam. Many of you will remember McCready's guitar riff at the beginning of Life On The Run, on DB's Feel That Fire album, sounding so much like a motorcycle, you almost forgot it was a guitar--that's talent!


Dierks, bassist Cassidy Feasby and fiddle player Dan Hochhalter could not contain their excitement on Twitter about getting to play music with their idols. 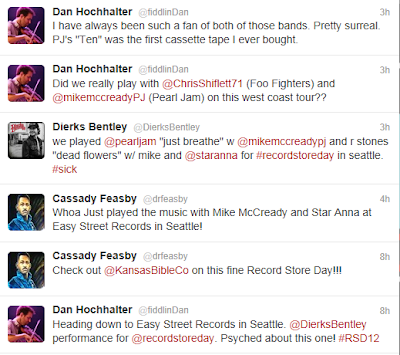 Below are two videos from You Tube of the cover performances..  Before "Just Breathe" be sure to listen to DB talking about the song and what it means to him.  Dierks and Team Dude also sang Feel That Fire, Am I The Only One, and Home.