DB Congress reps, Dave and Jamie Watts, promoting our president in California, set off on a DRT (Dierks Road Trip) to Los Angeles and Pozo last weekend.  Come along with them on their journey... 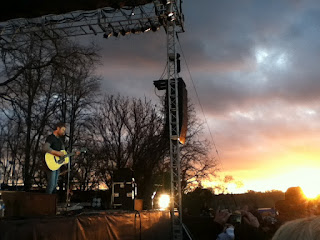 Dierks Road Trip 2012
By Dave Watts (aka @DistantShore19 on Twitter)

If all I had to do was tell you about how awesome the first weekend of the new "Country and Cold Cans Tour" went, that would be easy. With four hours of concerts over two days, there are many memories.

Dierks was in top form playing all the number one's, along with five off the new album, mixed in with covers from artists as diverse as Buck Owens to The Foo-Fighters. The sound was great, and the new light show was top notch [thank you Chris Reade!] (In LA; lights blew out in Pozo).  But no matter what kind of fan you are, Dierks did not disappoint!  Duh! Selling out Nokia (4,300) and Pozo--wow!  Bigger, better, with a new album in tow, Dierks was incredible. 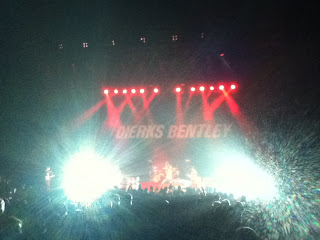 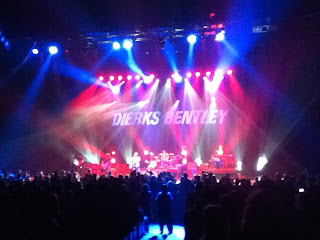 But sitting here reflecting on the weekend, all I can think about is Dierks Bentley--the person--and the Band of Brothers he has surrounded himself with.

Some of my most special moments were more personal.  They include my wife (@jkonthecoast) and Tim Sergent (steel guitar) discussing his "warm hands" and where he bought his gloves--how real is that?  Another was Cassady Feasby (bassist, aka @drfeasby) and Dan Hochhalter (aka @fiddlinDan) taking time to shake our hands and say hi.  By the way, they were NOT part of the Meet and Greet (M&G)! Dan was talking to my wife about her life and her profession.

Cassady asked how our kids were and how the drive was from LA to Pozo.  This was NOT acting.  These were real questions, real conversations, with real people. Simply genuine is how I would describe Team Dude.

And of course, there is Dierks.  During Home in LA, thanking the fans, he points to my wife (we were 28th row) and says,

Everyone was looking at us with our DB Congress shirts on and cheering.  It was crazy. By the way, dbcongress, when DB points at you, he really sees you.   When he says, "I see you up top, with that lil' white tank top," he really does. When Dierks says, "I love you guys," he means it!

And then of course there was show #2--Pozo, CA, where we had a M&G with our President, Mr. Dierks Bentley!  Needless to say we were  jacked up to finally get to meet Dierks after so many shows (our first was in 2006). Once DB came out and started to chat with the group, I knew this was gonna be special.  DB talked about the LCB8 and told us about his solo drive through the "woods."  Very cool getting into Dierks' head.

When it was time for the individual M&G, I was standing in line watching my wife chat with DB.  I had it all planned out.  I knew exactly what I wanted to say! Ha! What a waste of time because as I walked up to Dierks he turned, looked at me and said, "Dave...DistantShore19, right?  It's a pleasure to finally meet you!"  I was floored! A pleasure to meet ME?  He thanked me for all my tweets and constant support. 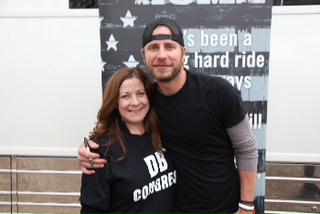 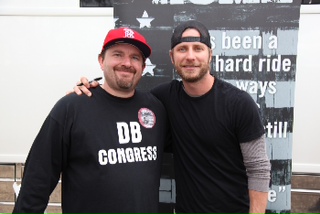 I realized at that moment, I didn’t have to tell him about all the shows I’ve been to, or all the TV performances (Leno, Ferguson, etc.) because Dierks remembered.  He sees you on Twitter/Facebook supporting him.  He sees you in the front and in the last row. Dierks is watching us, too! Dierks is a Fan of US (HIS CONGRESS). He genuinely appreciates his fans. I truly believe this is what separates Dierks from other artists.

And now he has a group of musicians ("dudes") who feel the same way about the fans.  It was simply one of the best days of our lives. 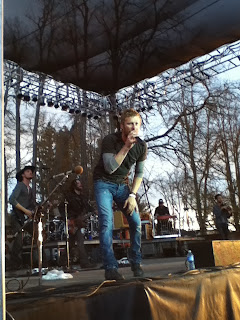 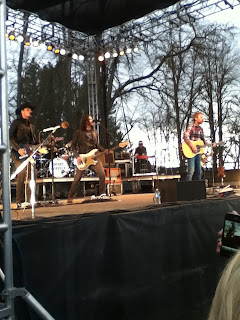 Eight years ago when I first heard Dierks, I knew I was connecting with his music on a much deeper level than with other artists (of any genre of music).  It was touching my soul.  I always believed in DB, his music and his message.  It always felt personal with Dierks, And finally getting  that once in a life-time chance to meet him only affirmed what I already knew:  Dierks, “the human being,” is what makes Dierks, “the artist/musician,” so damn special.

Thank you, Dierks.  We love you, Brother!