Life Finds A Way For The Grascals & Dierks Bentley 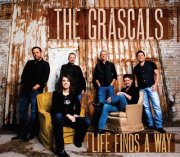 Bluegrass greats, The Grascals, posted on their facebook wall on Wednesday that they were, "tickled to learn that the song "Life Finds A Way" (the title cut from our new CD on Mountain Home) is the #1 song on the Bluegrass Today chart. Thanks to everyone that is playing it!"

Dierks Bentley fans will find the song especially sweet since he helped write it.  Country Standard Time confirms, "the album still finds the band is digging its collective teeth into composing as they co-wrote 5 of the 13 songs including the title cut with help from Dierks Bentley."

Long time friends, Dierks and The Grascals have been featured on each others albums over the last several years, such as Prodigal Son's Prayer on DB's Long Trip Alone Album, and Folsom Prison Blues on The Grascals Cracker Barrell project--The Grascals & Friends – Country Classics With A Bluegrass Spin.

Email ThisBlogThis!Share to TwitterShare to FacebookShare to Pinterest
Labels: bluegrass, Dierks Bentley, GACTV, Life Finds A Way, The Grascals, The Grascals and Friends