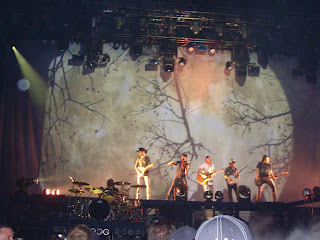 It's two in the morning and the house is quiet except for the sound of us Chatty Cathys whispering wildly about the amazing Dierks Bentley experience just a few hours before in Estero, Florida, March 15.  We're at the kitchen table, munching on McDonald's and trying not to wake up Sherrie Shamon's husband, mom or dog Lexi.  The alarm gets set for 6 am to get on the road to Jacksonville to do it all again. Such is the life of two long-time DRT (Dierks Road Trip) buddies, right?

Wrong.  Sherrie and I met on Twitter and Facebook over a year ago, but this was the first time we met in person.  To save on hotel expense, she opened her home to me.  Who does that?  Friends through Dierks--DB Congress friends!

And it's as if we've known each other for years--instantly.  We have a lot in common--around the same age, have grown kids, a love for Dierks and his music, but one thing was was not so common.  While I will hit my 50th DB show this year, Sherrie was a Dierks 'virgin' before that night!  Yes. After a year and a half of promoting him daily, this was Sherrie's first Dierks concert! He finally came a little closer to her in Florida --and she won a Meet and Greet! 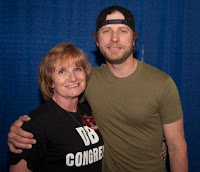 "When Dierks first came into the meet and greet, he said "Hey, guys. How's everyone doing?" Then he walked over and stood next to me, put his arm around me, hugged me close to him, and said, "So, you've been waiting here all day?" I almost died right then and there! I was so surprised!


He then asked if anybody had any questions for him. Someone asked about Last Call Ball and he said it would be either Wednesday or Sunday [We now know it will be Sunday--details next week!] and might be during the day. He was sniffling and I asked him if he was getting sick, since we knew Brian had been sick (Brian Layson, lead guitar). He said no, he had allergies. Someone said something about his daughters and he said yes, they were with him. I said that I had seen them out on the stage earlier and he laughed and said that they were out there making sure everything was set up right!

When we got the one-on-one time with him, he was getting ready to sign my t-shirt that I had bought and he said, "It's Sherrie, right?" I was so shocked that he knew who I was and he said, "I know who you are. I see you on Twitter." 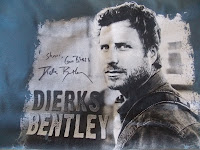 They had asked us to only have him sign one thing. But I also had on my DB Congress t-shirt and after he signed the t-shirt I bought for him to sign, he asked if I wanted him to sign my t-shirt that I had on.  I, of course, immediately said yes. So, he signed that, too!


He was so gracious and took his time with all of us. It was not rushed at all, even though there were a ton of other people waiting to meet him (he met with the fan club members first).

My favorite part of the concert? Hmmm....that's a hard one. I absolutely loved the Up On The Ridge part when they were up there on the elevated stage with the woods background. And I loved when they all came down to the end of the catwalk and played. I also loved how he interacts with the fans during the concert. He makes everyone feel like he's there just for them. It was just totally amazing."

Thanks for sharing your DB experience, your home and your friendship, Sherrie!