Love Grows Wild in the Bentley Home: Baby #3 On The Way! 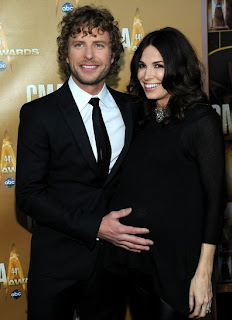 Dierks Bentley's family is growing.  This fall, the Bentley home will house seven (his lucky number that you'll find on the back of his Nashville Iceholes hockey jersey and guitar pick) -- two dogs, Jake and George; two daughters Evalyn "Evie" Day (4) Born October 4, 2008 and Jordan Catherine (2) born Christmas Day 2010; and mom Cassidy and daddy Dierks have another baby on the way!

In typical DB style, he announced the news with sports humor on Twitter: 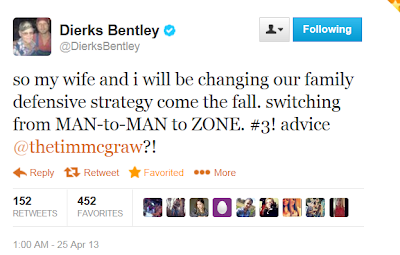 Possibly hoping to tip the male-scale 4-3, Dierks hinted when a follower assumed the gender:

A reply from Tim McGraw gave Dierks some strategic advice from a father of three daughters:

Boy or girl,  Dierks will have to juggle a lot, with a new album due this fall as well as a new baby.  But he always seems to find a balance with career and family, and that only makes his music stronger and more meaningful.

The Tennessean shared this:


"It was just about three weeks ago when after a show in Las Vegas, Bentley was proudly showing off a cell phone picture of Evalyn perched on the back of a pony wearing a princess cape.  She was at a birthday party and he missed it because he was out of town. Last year the “Home” singer talked openly about how hard it was to be away from his family while he was out playing shows.

“I’m always thinking about my girls and always missing them,” he said. “Now that the curtain’s been raised on that emotion and you can see what life is all about, it amplifies everything you do. It affects your soul in a weird way. Every moment away from my house has to be huge. I say a prayer every night with the band and I say at the end that we have to make this day worthwhile and not only for our fans but for the people who are at home missing us.”


Dierks and Cassidy have been married since December 14, 2005.

There’s a place where love grows wild
Where hearts can trust just like a child
A wild thing, it don’t need a lot
It just grows on what it’s got
It stills grows no matter what
-Julie and Buddy Miller (Love Grows Wild, sang by Dierks Bentley on his Up On The Ridge album)

We are so excited for Dierks!  We think he's a wonderful dad and are thrilled for him and Cass!
Posted by DB Congress at 11:07 AM