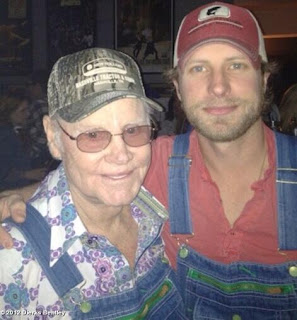 George Jones and Dierks Bentley were set to perform in Nashville on November 22 at the final show of George's farewell trek, The Grand Tour. But George said goodbye for good yesterday when he died at age 81.

Dierks is heartbroken.  He promptly changed his profile picture after DBC rep, Adrian Taylor, resent the picture he tweeted a while back, and shared his sadness on Twitter: 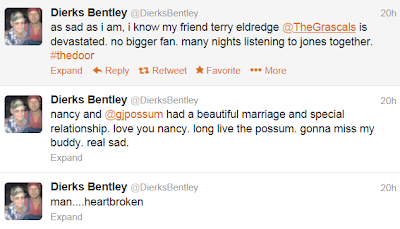 On Monday, Dierks tweeted get well wishes, proving how big a fan he was of George: "wearing this today in honor of @gjpossum. hope the possum gets well soon!"

But George died Friday at Vanderbilt University Medical Center in Nashville after being hospitalized with fever and irregular blood pressure.

"With one of the most golden voices of any genre, a clenched, precise, profoundly expressive baritone, Jones had No. 1 songs in five separate decades, 1950s to 1990s...his signature song was "He Stopped Loving Her Today," a weeper among weepers about a man who carries his love for a woman to his grave. The 1980 ballad, which Jones was sure would never be a hit, often appears on surveys as the most popular country song of all time." - Associated Press

Dierks paid tribute to George and the song on DB's self-titled album with his own song, "Forget About You:"

About four years ago, we told you about Dierks learning from George that it's "really about emotion in your voice and singing through a broken heart." That emotion is always evident in Bentley's vocals. He learned well from the "possum!"

At George's 75th birthday celebration at The Grand Ole Opry, Dierks honored his friend by singing, "Walk Through This World With Me."

Dierks and George teamed up for the Songs of the Year album collaboration in 2006 with the classic, "Murder On Music Row." At the end of the song, the two friends banter about where to go for a drink after. George says, "Let's don't go down on murder...Music Row!" Listen here:

Our hearts are heavy and we pray for his family and friends to have strength and remember all the good times with George.

We're going to miss you, George! But we know our prez, Dierks will miss you more.  Somehow, we don't think he could ever forget about you.

Email ThisBlogThis!Share to TwitterShare to FacebookShare to Pinterest
Labels: country music legend, Dierks Bentley, Forget About You, George Jones dies, He Stopped Loving Her Today, Murder on Music Row, Walk Through This World With Me