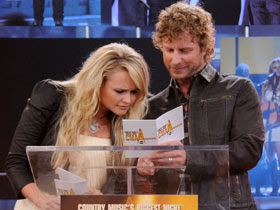 Dierks Bentley and Miranda Lambert said each other's name a total of seven times yesterday during announcement of five CMA Award nominations on ABC's Good Morning America. Although they feigned surprise, Miranda was nominated in four categories, Dierks in three, including a combined nod for the pair of pals for Musical Event Of The Year for "Bad Angel" with Jamey Johnson from Bentley's Up On The Ridge album.

When reading Album of the Year nominees, Dierks leaned over to Miranda and asked, "Can you read that one?" Miranda played along, "Oh that says...Up On The Ridge," and they both blurted out, "Dierks Bentley!" Miranda was also nominated for her album, Revolution.

Miranda announced Musical Event of the Year, and first up was Dierks/Miranda/Jamey and the crowd laughed along with their exaggerated surprise. They go up against her 'financy" (fiance) Blake Shelton's Hillbilly Bone.

Dierks read the Female Vocalist list and the crowd went wild when he said "Miranda Lambert!" Three for three so far for her!

Up next, Male Vocalist. Dierks joked, "You better return the favor I mean seriously...I cheated, you weren't actually on there."

Miranda coyly read four of the five Male Vocalist names, skipping over Bentley's name until the end, even though his face appeared on the screen. Trying to not seem worried, Dierks said, "I saw my picture up there you better have my name on there..." "I did it out of order," she admitted smiling. Three out of four ain't bad!

For Entertainer of the Year, Miranda picks up her fourth nomination. Added to the five from the day before gives her a total of nine--the most for any female artist ever!

"I just want to thank my mom, my family, my wife...," Dierks began. GMA host, Robin Roberts reminded him, "You don't have the award yet." "Oh, sorry I thought this was...got carried away," in typical Dierks humor.

DB Congress is beyond excited and thankful to the CMA for our president's three nominations! We are so proud of you, dude! Crossing fingers for the same number of wins! You truly deserve them all!

Album of the Year:
"Need You Now" by Lady Antebellum
"Play On" by Carrie Underwood
"Revolution" by Miranda Lambert
"Twang" by George Strait
"Up On the Ridge" by Dierks Bentley

See the rest of the nominee categories here.

Here are the video of Dierks and Miranda's announcements, reaction and Q&A: