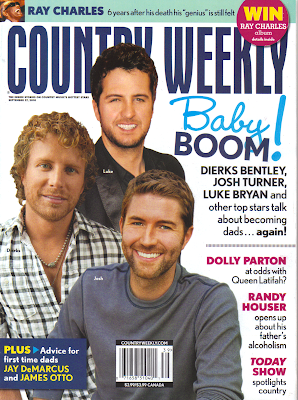 Dierks Bentley joins Josh Turner and Luke Bryan on the cover of Country Weekly's September 27 issue. The feature article is titled "Baby Boom!", but other than mentioning Dierks' name twice and a photo of Dierks and Cassidy, the story didn't have one quote or even one sentence about him! What?

Don't get me wrong, I am extremely grateful for any and all "Dierks" on the cover and on the pages of Country Weekly. I just don't understand why he was even on the cover if the story was going to be all about Josh, Luke and Rascal Flatts? Shouldn't it have been 33% Dierks?

What do you think, congress? Oh, and while you're at it, would love to read your thoughts on the picture they used of Dierks on the cover. Hot or Not?
Posted by DB Congress at 4:05 PM