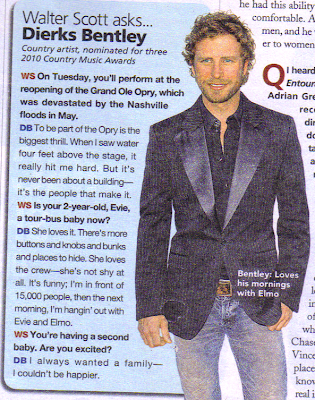 You expect to see Dierks Bentley in Country Weekly magazine, but imagine my surprise when he popped up on page two of the 9/26/10 Sunday "Parade!"

WS: On Tuesday, you’ll perform at the reopening of the Grand Ole Opry, which was devastated by the Nashville floods in May.

DB: To be part of the Opry is the biggest thrill. When I saw water four feet above the stage, it really hit me hard. But it’s never been about a building—it’s the people that make it.

DB: She loves it. There’s more buttons and knobs and bunks and places to hide. She loves the crew—she’s not shy at all. It’s funny; I’m in front of 15,000 people, then the next morning, I’m hangin’ out with Evie and Elmo.

WS: You’re having a second baby. Are you excited?

DB: I always wanted a family—I couldn’t be happier.
Posted by DB Congress at 2:23 PM