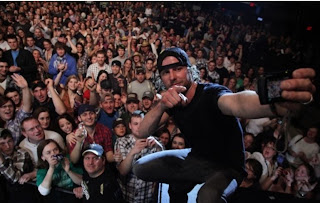 Randy wasn’t able to attend, but when he realized it was his camera Dierks is holding in the lanyard photo, and Randy himself is in the background, he knew he had to have a commemorative LCB7 ticket. After all, he is a part of history!

David found out and here’s what he had to say in an email to Randy:

Hi Randy,
My name is David Mattingly and I am a proud member of the DBC (david915) representing Kentucky. I read a post about you wanting a ticket from this past LCB. What is coincidental about this is that I can remember the day I got that ticket in the mail. I looked at it and thought "wouldn't that be cool to be one of those people in the background."  So in a strange way, that is why I have no problem at all in giving you my ticket from LCB. And so cool as well that it's your camera that he has in his hand! Just send me your mailing address and I'll get it in the mail soon.

It's moments like these that make me so proud to be a part of the Dierks Bentley Congress! Fan-clubbers helping fan-clubbers—one big DB family!

“I feel the same way,” replies Randy. “Everyone that is part of the DBC or who is just a Dierks fan is a part of this great big family. That's one thing I love about all us Dierks fans is that we all help each other out.”

Randy became a Dierks fan when he first heard the song, “What was I Thinkin'” back in 2004, which was about when he got into country music.


From that point on Dierks' music helped me get through a lot of broken relationships and other issues in life. His music always depicted what I was going through. That in itself really made me feel more connected with Dierks' music.

“I'll be honest,” he continues, “the reason I joined the fan club was for a meet and greet ticket, and for $9.99 a year you can't beat that! But then after joining (and receiving the M&G) I realized how awesome this DB family is, and that we all look after one another.”

“Before joining the fan club I was a part of the "Wolf Pack" which was the group of Dierks fans that watched his Ustream of making the album in Asheville. From that point on I really got involved with talking to other Dierks fans. I met so many awesome people that I know today and we all share a passion for DB's music.

Being an artist hisself, and getting the chance to talk with Dierks about his music at the Meet & Greet really encouraged Randy to keep going.

“At the time of the meet and greet, I was in the middle of recording my album and told Dierks about it. He even let me play some samples of my music and I told him to check out my Ustream of recording live in the studio. He said I had a great voice and was looking forward to hearing more stuff from me in the future.

As an artist, Dierks’ music has influenced the way my music/lyrics are, and how I perform on stage. I've seen Dierks four times in concert, and I learn new things every time I go. The way he includes the audience and moves around on stage; these are things that I incorporate into my show and is probably why I have been getting great feedback and attendance rates.

Just to be able to meet him and talk with him about music in itself was incredible and a memory that I'll never forget. Even the fact that every show of his I attend he somehow manages to take my camera and take a picture with it. I can only hope one day that I would get to open for Dierks and get to know him better. But like his song says, free and easy down the road I go. I'll keep going until I get where I want to be.

Call me a hardcore Dierks fan or not, he has changed my life and helped push me to achieve my music goals. Thanks DB!”

Here is the video when Dierks took the camera from Randy (sorry there's a lot of static at the beginning):