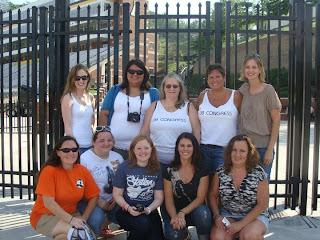 DB Congress held session July 23, 2011 at Appalacian State University, just prior to our president Dierks Bentley's Saturday night concert.  Consensus from the crowd and more than 14 DBC reps was that we were ready to throw down.  Lining up hours before the 6:30 gates opened, 6,000 DB fans rushed in to get a green wrist band guaranteeing a spot on the field up against the stage.

"The Dierks Bentley concert at Kidd Brewer Stadium on the campus of Appalachian State University was possibly the best Appalachian Summer Festival concert I’ve ever attended," John Carter of Charlotte's WBTV stated in an email to one of our NC DBC reps (Sandra).  "I’ve never seen a crowd with so much energy and excitement for a performer! And Dierks Bentley was incredible! He put on a fantastic show! It was a totally enjoyable experience for young and old alike," adds John. "Dierks Bentley is a terrific entertainer!"

Truly, the Boone, North Carolina show was THE best pre-during-and-post Dierks show I've ever experienced.  In this series of blogs, you'll hear from many of the DB Congress reps who were there and their unique DB stories.  First up, Adrain Taylor (NC), who was celebrating her 24th birthday: 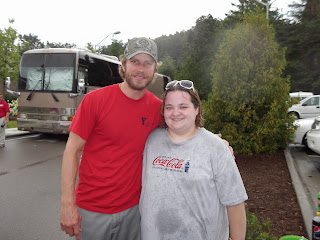 "So Saturday July 23 was the absolute best day of my life. Around 3pm, after the rain had finally passed, I was getting some things out of my trunk so we could start our tailgating party over again, I heard someone shout "Adrian Taylor..need to see you." I turned around and to my surprise it was Dierks Bentley coming to my car. He asked if he could hangout for a while and of course I said, yes! He took time to sign my nephews shirts, and my cousins' shirt and of course mine, as well as some other people who came up.

While he was there I gave him the gifts I took him. A replica of his 77 CJ7 Jeep (which he said he would carry in the jeep), a photo album from a lot of his shows (which he said would remain on his bus and he would add to it), and a tshirt that read, "Sang my butt {here there was a picture of his butt} off in NC and got this awesome shirt."  He loved the shirt.


Dierks made a comment about me being so close to his bus (we were like 10 feet away) and I said well when you get here at 1 pm, you find the best spot. I told him I was wondering if they were going to make us move, but he goes, no...you are fine...trust me. 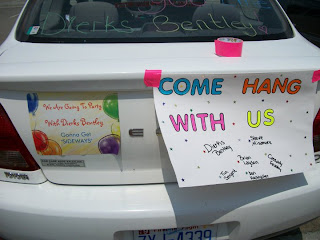 While there, we talked about music and he told me to go for my dream of singing. Once again, he gave some helpful advice and some great points. He even told me to make sure I attend CMA Fest 2012, so I am definitely coming!

I had a cake made, and Dierks wanted some, but had to go somewhere right then, and said I will be back, if I don't get back, bring it to the meet and greet. So I took the cake to the meet & greet, along with the poster for Miss Willie Brown, as well as the DB Wolfpack sign! We had a good laugh about the MWB sign and I told Dierks he was way too nice to Amanda and Kasey with the beer prank. He said yeah and he thought one more prank needed to be done to determine a winner. 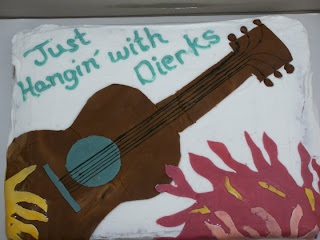 For my picture now, he got on one knee and we posed with the poster. Later after this, he asked me something that kind of shocked me. He asked if I was getting married..and I was like I have no clue, guess when I find the right guy. Dierks laughed and said, "well I better get an invite." And I replied, by saying, have no fear, you will be the first." 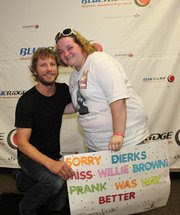 After all of this, Dierks--like always--put on an awesome show, and left us all wanting to come back for more! My nephew Max (who stood for Dierks the whole concert) was standing there singing most of Dierks' songs...and occasionally I put him on my shoulders...Max was so thankful that Dierks passed one of his guitar picks to Dan, who handed it to Ryan (Camera Guy) who hand delivered it to Max. After this, Max got back on my shoulders and gave Dierks a thumbs up, and Dierks gave him a thumbs up back. :)

Dierks truly knows how to make a fans day! Even an 8 year old who wanted to see Dierks for his birthday! 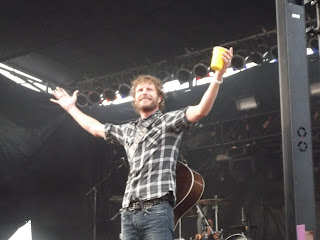 Can't wait for my next Dierks Bentley show! Thanks for a night I will never forget, Dierks!"
Posted by DB Congress at 7:38 PM