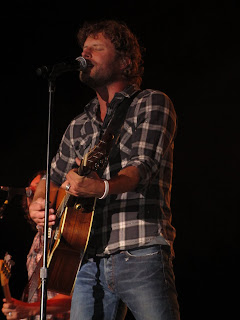 The Franklin Volunteer Fire Department in Chambersburg, PA turned to Dierks Bentley when they needed a little help raising some money for their equipment fund. The idea to host a concert at the local high school football stadium came from a group of firefighters who also happen to be country music fans. They suggested that having Dierks in town would be a huge event, since many of the people in the rural town had never even attended a concert, let alone one so close to home.

Hopes were high when Dierks agreed to play at the fundraiser, but ticket sales were a bit underwhelming for the hosts. There were worries that there would not be enough tickets sold in order to earn money for the equipment fund. However, after last minute tickets were purchased, the stadium held a respectable number of fans and was a great success for the firefighters. The show even sparked the idea of holding regular concerts in Chambersburg because the locals had such a great time.

Fire company spokesperson Brad Elter guessed the turnout was about 3,000. The stadium holds 10,000 people. He said everything was running smoothly, with no major problems reported as of 9 p.m.

"We wish a few more tickets were sold, but that's evident of what we're trying to accomplish," he said. "The key thing is, we got blessed with great weather."

The main attraction began about 9:30 p.m. with the artist's 2008 hit single, Feel that Fire." Early in the show, Bentley gave special mention to the fire company hosting of the concert.

"Thanks for having me and the boys tonight," he said.

Beachballs bounced throughout the crowd as Bentley and the band played their new song, "Am I the Only One?" A red plastic cup in his hand, the singer leaned into the crowd and interacted with those dedicated fans who managed to secure a spot in the front row.

Jim Leaman of Fayetteville said it was "exciting to have such a popular singer" come to the area. A frequent concert goer, Leaman is used to venues that are packed with people to the point of discomfort. He was enjoying more freedom of movement Friday night.

"Yeah, I was expecting more people," he said. "It's their loss if they didn't come, though. It's a great show."

It definitely was a great show for a wonderful cause! Dierks mentioned during the show that firefighters are close to his heart because his sister worked as an EMT for many years. He went on to say that the heroes that protect us here at home don't often get the recognition they deserve. We all know that Dierks has a big heart, and it's great to see others discover that as well. Great job, D! 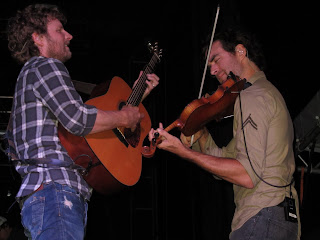 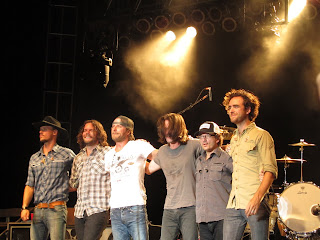 Email ThisBlogThis!Share to TwitterShare to FacebookShare to Pinterest
Labels: Am The Only One, Chambersburg PA, Dierks Bentley, feel that fire, Franklin Volunteer Fire Department