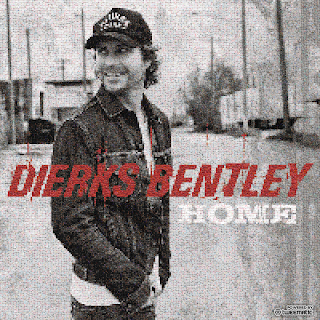 Dierks Bentley just finished a live video online chat a few minutes ago! He answered questions from his fans who had posted on facebook, twitter and the live chat box.  How DOES he keep up with us all?

**EDIT:  Here's the video, but we've also recapped some of the Q and A below that.


These are not verbatim and not complete answers, just general notes.

If you weren't playing music, what would you be doing?
"Maybe coaching a pee wee hockey team," he joked.  But he does love hockey.

What song on the new album "Home" was the most fun to make?
"Heart of  Lonely Girl."

Where's "Fastback" why is it not on the album?
"I love that song but it didn't make it."

What about "Country and Cold Cans?"
"That song will be on a special edition for Target, along with "Line No. 7.""

What song by another artist do you wish you recorded?
"I listened to Jake Owen's last two singles when they were demos.  I like it when the song finds the right home (artist)."

When did  you decide to be a songwriter?
"I was 17, listening to Hank, Jr., I rewrote the lyrics to a Charlie Daniels song...I'm still trying to be one (a good songwriter)"

Some DB Congress Reps are doing a Lake Jump at Percy Priest 2/3, the day after the Ryman show 2/2.
"Looking forward to The Ryman show.  I'll be in town that day I may have to check that out."

How do you pump yourself up before a show?
"We have Brit who makes backstage really nice /comfortable; we jump up and down a few times..."

What CD is in your truck?
"I know there's something, just don't remember--I'll get back to you on that one."

Plans for the song, "Distant Shore?"
"I wish I had made it a single.  I'm thinking of breaking it out for this tour."

What do you hope to leave for your legacy?
"I never think about it.  I love what I do and I'm so thankful to be doing it.  I hope to be remembered for putting on great shows and I hope the music's meant something to you guys."

Got any advice for songwriters wanting to move to Nashville?
"Follow your dream."

Touring must be exhausting--how do you do it?
"I feed off the energy from the Meet and Greets and the crowds.  This year we're gonna have fan club passes with embarrassing pictures of the guys.  The goal is to collect all five (LOL)"

What is your dream concert line up?
"I would draw on my friends from the country world - loved doing Bad Angel with Miranda and Jamie; the Bluegrass world, the rock world - Foo Fighters, Pearl Jam--I'm a big fan--Bono, Springsteen..."

What do you enjoy the most on the road?
"That one and a half hours on stage is the best; being on the bus with the guys in the band, playing poker, listening to music, just talking and hanging out."

When are you gonna quit duct-taping your boots and get new ones?
"My boots are new every tour, I have 3 sets, just tape them up... they don't last long, maybe I'll get some cowboy boots..."

I only ever see you with the guitar with the hole in it--when will you get a new one?
"I don't like new things.  That guitar and I have been through thick and thin.  It is special to me, given to me brand new from a friend."  Just like our tour bus--old--will turn a million miles this year.  When it does, we'll have to stop and have a gig to celebrate."

Being from Arizona, how did you get into hockey?
"I wanted to do something totally different off the road and hockey's a great release--that and beer with the guys afterward."

Do you like smaller or bigger venues?
"Both.  I like variety.  I love the small intimate bars, and being outside in the summer, never knowing what we will get."

Random shout out to Stacey and Rachel in Australia!  Dierks said he knew about Lee Kernaghan years ago and is excited to tour with him in March in Australia.

If you could see any 3 people in the front row of your concert, who would it be?
"Someone with a Little White Tank Top--it would be the fans--passionate fans with the [DB] merch on, the signs held up with song titles--when I see them down front I know they waited all day long to have that spot."

Who wuld you like to do a duet with?
"I love Karen Fairchild's voice (from Little Big Town) and I love the song we sang on the new album--it's called 'When you gonna come around.'"

What's a typical day like for you at home?
"I write songs, I work out, got up at 5:50 a.m. this morning cos the rest of the day was so busy, band practice, then home on the red couch hanging with my girls."

Which songs get the best reaction in concert?
"I have never tried out more songs than last year.  Diamonds Make Babies and 5150 got good reactions (both made the album)."

Favorite concert lineup to watch?
"I love watching all genres.  George Strait would have to be in the mix."

Tell us about your Stubbs hat.
"My good friend Cody Canada (Cross Canadian Ragweed) gave it to me so I love it just for that reason alone, but also Stubbs is a BBQ place in Austin--love Austin, and then there's Eddie Stubbs."

Dierks thanked everyone for their support and signed off the live chat after just 45 short minutes (vs. the normal hour).
Posted by DB Congress at 9:33 PM