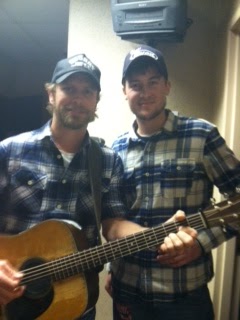 Justin Bockbrader is one of two grand prize winners from Dierks Bentley's "Map of Home" contest, and he spent the day on the road with Dierks and crew in Mt. Pleasant, Michigan yesterday, collecting on his grand prize package!

The Map of Home contest was created to promote Dierks' new single, “Home.”  DB Congress members were encourged to "pin" their "home" on a giant map of the world, and tell their story of what home means to them, with words, pictures and videos.

Justin lives just outside of Bowling Green, Ohio in the country side of a very small historical town.  Dierks' Mt Pleasant, Michigan show on January 21 was the closest tour date near Pemberville.

"I just started this past summer to be a fan club member (now listed on the dbcongress.com rep page under Ohio!).  I never knew it existed. But I came to know of Dierks when I listened to some of his older stuff and loved it because he sings about heart break and at that time I felt like I was in every song because I've went through all of that," Justin told us.  "I respect and love how he writes the majority of his own music--now a days that's very rare."

Justin's winning entry is below.

I chose this picture because it is a true definition of home. This farm has been in our family for many generations. From the flag that hangs that was given to us at my uncles funeral, to the 1941 John Deere thats plowed many of fields and helped the family survive. My uncle lived on the farm right after WWII was over. He served for his country just like thousands of others did, and once he passed we could not give the farm away, so now we have family reunions and gatherings at the homestead. All 150 people come out year in and year out to see the old tractors and barns that stand tall for over two centuries. We still farm the land because thats what my uncle and our ancestors would want. I always stop out to see the flag drapped over the beams and think to myself I live in the greatest country in the world and nobody could ever take that from me. God Bless.

Dierks posted a series of tweets to introduce us to Justin:

"the first winner of our HOME map contest is here at our show in Michigan. about to go meet him. he is hanging out with us all day"

"say hi to justin bockbrader! or @bockbutt10. cool HOME story" (Justin tells us the nickname "bockbutt" was given to him by a buddy in the 6th grade and it has stuck every since...) 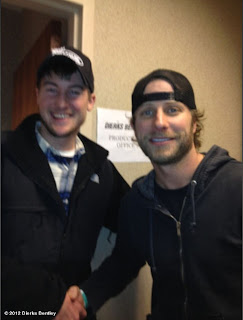 "he's a hockey player AND the number 7 is his number like me. liking this dude" 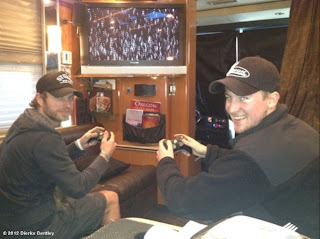 Justin told us that hockey was another huge influence on why he's a fan of Dierks.  "I've played since I was four and it's rare to see any artist lace them up (hockey skates) let alone a country superstar like Dierks."


"1st preshow prayer and huddle with our HOME map contest winner @bockbutt10. thx justin for hanging w us all day." 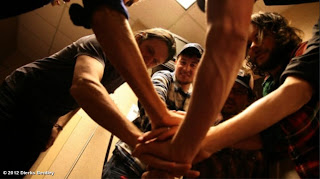 My day with Dierks was one of the coolest experiences ever--the man is so down to earth and the nicest dudes I've ever met. Not only him but also all his band members and stage crew guys. Such good people involved with Dierks. We started out eating lunch and meeting all the members, then we went to the tour bus and played some video games but the NHL game was scratched (he knew I would of owned him).

Next I watched the sound check to all the songs he was doing that night. Later in the day my parents and I got to do the meet and greet and attend the show. 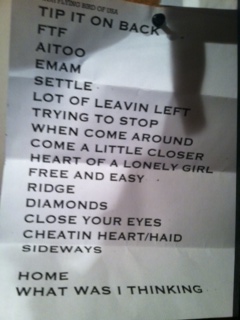 "Finally after the show we got to hang out on the tour bus with guys and tipped a few brews back. Dierks is a big fan of old classic country music like Hank, Johnny, Strait, and Waylon which I love about him. I always felt like he would be a good man to tip a few back and listen to country gold saturday nights with."

Dierks lived up to that sentiment by opening the show with a new song from the upcoming "Home" album, "Tip It On Back."  Justin and his dad got to do just that. 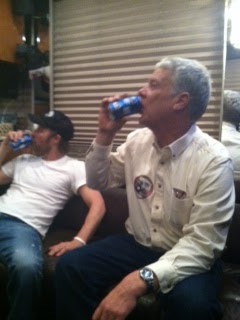 "Just an overall hell of a time," adds Justin. And one final Tweet:

@Bockbutt10: @DierksBentley Dierks man, really appreciate everything, was a badass time and experience, thanks for everything brother hope to see ya soon 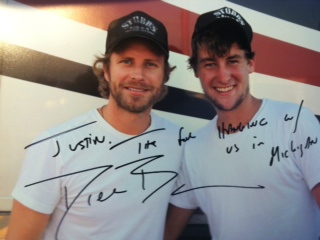 Congratulations, Justin! Thanks for sharing your experience! And welcome to the DB Congress!