Dierks To Debut "Home" On WSM 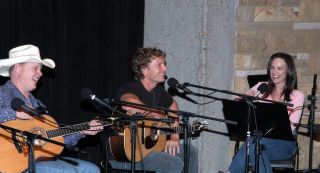 Waiting not-so-patiently to hear every song in it's entirety on Dierks Bentley's new "Home" CD, instead of the mere 90 second preview on iTunes? Can't wait for the CD release date of February 7? Then tune in to 650am WSM radio on Thursday, February 2 at 2 pm central time!

You may recall that Dierks did a radio show last year on WSM called, "The Thread," produced by Shannon McCombs.  Shannon posted on facebook that she was editing a Dierks radio show--a special that our DB Congress president is hosting--where he will showcase his next CD (Home).

I know many of us DBC-ers will be in Nashville on that day to see DB that night at The Ryman, so be sure to tune in!  If you want to listen online, go to wsmonline.com!

*The photo was found on facebook taken at the Country Music Hall of Fame about ten years ago.
Posted by DB Congress at 10:51 PM