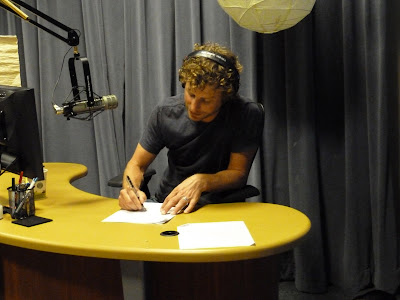 For as long as there’s been radio, there have been on-air personalities whose talents centered on keeping listeners tuned in long enough to connect with artists and advertisers. For performers seeking to build their fan base, this formula has worked for decades, especially when encouraged by radio tours, to visit with DJs in as many markets as possible and encourage them to play their new single.

But with media, roles, options and other elements in the business shifting around so quickly, some artists are looking to expand their choices for exposure. And one trend involves artists moving to the other side of the microphone, as hosts of their own radio programs.

In years past, it wasn’t unusual for a singer to hold down a gig at a local radio station before moving to Nashville. Tom T. Hall, Waylon Jennings, Willie Nelson and Charlie Walker did it — but Holly Dunn reversed the formula in 1997. Already a recording artist with a string of hits that included “Are You Ever Gonna Love Me” and “Daddy’s Hands,” she accepted a job that year as morning DJ at WWWW/Detroit. Dunn, who had majored in broadcasting at Abilene Christian University, averaged more than 300,000 listeners per day for a year before returning to Nashville.

Today, Kix Brooks is heard nationally as host of “American Country Countdown with Kix Brooks” over Citadel Media. Kenny Chesney has overseen his own online show, “No Shoes Radio,” since August 2009. And in March, three artists — Dierks Bentley, Jim Lauderdale and Pam Tillis — have launched their own weekly, hour-long shows on 650 WSM-AM/Nashville, each one beginning at 2 PM/CT. The shows can also be heard online at www.WSMonline.com or as podcasts via iTunes.

The idea was conceived by Joe Limardi, Operations Manager, WSM Radio. “We have so many artists in as guests,” he explained. “Some are so good and have such good stories to tell and a love for music that’s not their own, I thought, ‘Why not let them be creative on air and offer them the opportunity to do their own show?’”

The first person Limardi asked was Bentley. “When I was approached about doing the show, I jumped on it,” the singer recalled. “I love WSM, I love its history and I love the idea of having my voice broadcast on those airwaves.”

Bentley came up with the name for his show, which airs every Monday. It’s called “The Thread” because it embraces all of the music that has influenced Bentley. He spent a lot of time at the Station Inn after his arrival in Nashville; today, performances from that famous acoustic/bluegrass venue are often featured on his broadcasts. Other hours are dedicated to themes reflected in their titles, which include “Ray Price: Priceless” and “The Thing About Don Williams.” Every now and then something unexpected adds to the mix, including a visit by WSM DJ Eddie Stubbs one day as he was in the midst of taping his show.

“He is a hero of mine and I try to imitate him,” admitted Bentley, who added that while it was challenging to come up with a focus for each show and material to fit that focus, the process has become easier with time.

After “The Thread” started airing, Tillis got in touch with Limardi and expressed interest in doing a show as well. “Pam came up with the name ‘Lettin’ My Roots Show,’ and if you listen to it (on Tuesdays), the show does go back to her roots in music and the relationships she’s built in Nashville,” said Limardi. “She has a genuine appreciation for all styles of music.”

Having grown up in Country Music, Tillis enjoys sharing memories and stories from her childhood in Nashville and on the road with her father, Country Music Hall of Fame member Mel Tillis. Each of her shows also centers on one theme, ranging from Native American music to political Country and The Beatles’ impact on Country Music.

“My first reaction about doing the radio show was that it sounds like fun but I don’t know how I could fit one more thing into my life,” Tillis said. “It would have been easier to just randomly pull songs, but I really like the idea of themes, which is harder to do and takes more effort.”

Though she does most of this work, Tillis credits her radio producer, Shannon McCombs, for helping her pull it together. “Sometimes Shannon will go, ‘Please just let me run with it,’” she said. “But I’m real hands-on with everything I do. I get manic about it, but it’s been worth it to me.”

One of the singer’s favorite shows was about her family. Her brother Mel Jr., known as Sonny, and sister Carrie April had never been on radio before being featured on “Lettin’ My Roots Show.” “My brother wrote ‘When I Think About Angels,’” Tillis said, referring to the Jamie O’Neal No. 1 single that he wrote with O’Neal and Roxie Dean. “So I played some of his songs. And my baby sister is an amazing singer, so I played some of her work. I even found something with her and me in Branson. And I ran across this old audio clip of dad and me, when I was 17 and I was on ‘The Mike Douglas Show’ with him. I was sitting at the computer, programming this for my show, and I was crying because things like that are fun to share.”

Having established the model with Bentley and Tillis, WSM didn’t have to go too far when it decided to look for an artist to host an Americana show. “Jim Lauderdale hosts our weekly roots show (‘Music City Roots: Live from the Loveless Café’), and we thought he would be perfect for an Americana show,” Limardi said. “He has such eclectic taste in music, which you can hear on his show.”

Lauderdale had some background as a radio host as he launched “The Jim Lauderdale Show,” which airs every Wednesday. Along with that experience at a college radio station in South Carolina, he brings a selection of CDs from home for each show that he tapes, which he supplements by going through the WSM library.

“I have a general idea of what I might play, and Shannon (McCombs) is a big help with organizing and suggesting,” Lauderdale said. “I love WSM, and what I try to do on the show is play about two-thirds traditional Country and some bluegrass and then throw in some singer/songwriter stuff. I don’t want to get too way out. The music has to flow with the rest of the songs that day on the station.”

After the Nashville flood in May, Lauderdale tried something a little unusual on his show. “I had the urge to do the show live, which is something I really enjoy doing and will do again as my schedule allows,” he said. “The WSM studio out by Opryland was under water, so we had to go out to Brentwood, south of Nashville, to the studio at the big tower, which is just off of Interstate 65 South. My slot is right after Joe Limardi’s show, so he runs things for me technically. Shannon was there too, and we really had a great time. I hope that comes across on the air.”

Once he had these three artists in place, Limardi needed to fill the 2 PM slot on Thursday. As a result, Ketch Secor of Old Crow Medicine Show comes in the third Thursday of every month to play music from his personal collection of recordings from the 1920s and 1930s. The remaining Thursdays feature a rotating list of hosts, which have included Mark Chesnutt, Dailey & Vincent, Billy Dean, Jack Ingram, Jewel, Sammy Kershaw, Lorrie Morgan and Dana Williams of Diamond Rio.

“The coolest part of it all is that it started with the idea of one artist and snowballed, with all these great artists who come in and say they’d like to do a show,” Limardi said.

While all of these artists enjoy dabbling in radio, none is ready to trade the stage for the studio as their top professional priority.

“I enjoy this but what I love is performing and touring and writing songs and making records,” Bentley insisted. "That occupies a lot of my time.”

“I love finding out the history of the music, turning up things I didn’t know,” Tillis said. “I’m learning, and I hope the audience is enjoying learning with me. I’ll come up with an idea and think, ‘How am I gonna do a show around this?’ And somehow I find it. I did a cowgirl show — who would think you could do that, but I did!”