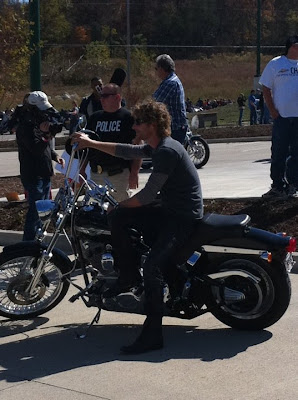 "Our feet never touched the ground, " Dierks told the concert crowd of more than 5,000 on Sunday afternoon, October 17, 2010, referring to the group of bikers who followed him from the Harley-Davidson in Columbia, Tennessee to downtown Nashville's Riverfront stage--without stopping. According to Dierks, they shut down Green Hills so the Police Department could escort close to 1,500 bikers as they rode to raise money for the kids.

DB Congress Missouri rep, Leigh and her husband Scott were among the riders. They also rode in the Dallas MM4K event earlier this year. 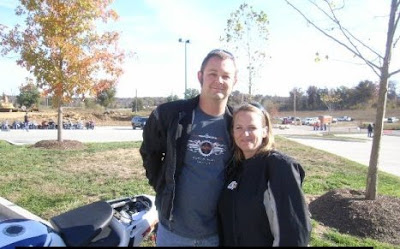 New Delaware DBC-er, Amy and her husband Bobby also followed Dierks on their motorcycle. "I am really pleased with my first experience at Miles and Music For Kids," Amy told me. "It was a perfect day to raise money for a great cause. The weather was beautiful, and all of the participants were eager to make friends with one another. One of the best parts of the day was being able to meet people from all over the country who share the common bond of motorcycles and country music."

Amy continues, "Dierks was a gracious host and made time to thank every fan for participating. It was exciting to know that he was riding with the rest of us! Dierks led the pack on a relaxing, hour-long trek through some gorgeous Tennessee countryside that I would otherwise have never seen. A police escort kept the group together all the way into downtown Nashville where the riders got to park next to the park. I had a fantastic time making new friends and raising money for a wonderful charity. I am already planning my return trip next year!" 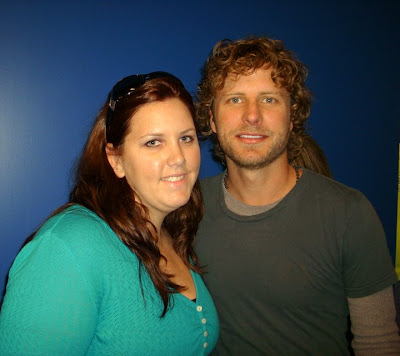 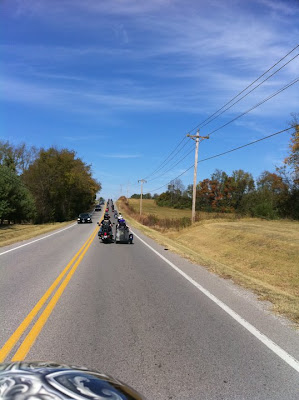 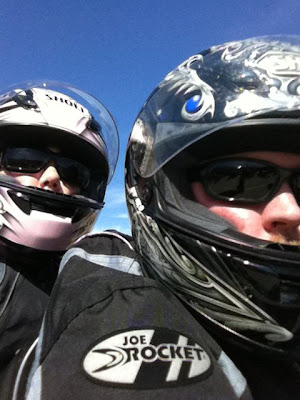 Even though this was the 5th anniversary of the Miles and Music For Kids in Nashville to benefit the Monroe Carell Jr.'s Children's Hospital at Vanderbilt, it was my first time at the event. It was an enlightening experience!

My Southwest flight from Tampa landed in Nashville on Saturday, October 16 around noon and my DB Congress friend Ann picked me up from the airport. We checked into our downtown hotel and then off to the fan club get-together at Joe's Crab Shack. We were 23 strong, from 11 states and signed 94 get-well cards for the kids! David (DBC rep in KY), organized the evening, and arranged through Chris (Dierks' road manager) to get a bag of DB guitar pics to place inside each card! WOW! We found out later there are over 200 kids in the hospital, so next year we need more cards, congress! 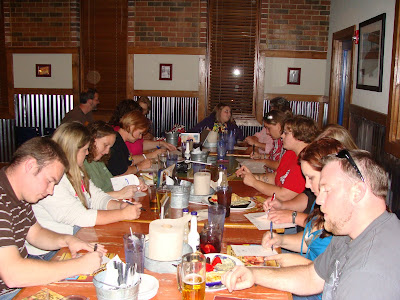 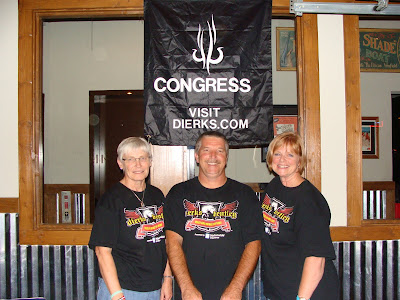 The next morning we drove to the Harley shop in Columbia to see Dierks off. We ran into about a dozen DBC-ers, too! 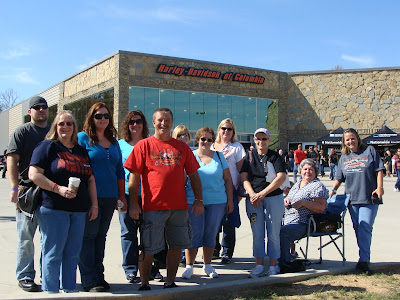 That's me on the far left--with the Starbuck's Grande Skinny Caramel Latte!

We picked up our VIP back pack and T-Shirt and I found a place to put all my stuff down and get organized. I had my back to Ann and her family and was only gone about 30 seconds. When I walked back over to them, there was Dierks! I couldn't get my camera out fast enough, but got a hug from him then up the stairs he went to the VIP lounge.

Outside, Ira Dean was just finishing up his set and I planted myself there right up front thinking Dierks would do some announcements before the ride. During that time, Dierks did some media interviews inside the shop, and several fans got autographs and photos. I was torn between running in there or holding my ground. I stayed, and got a few good shots of Dierks pre-ride: 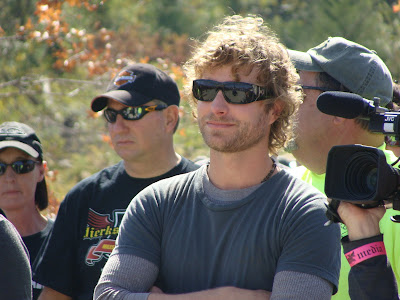 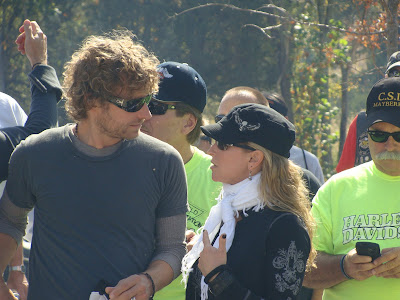 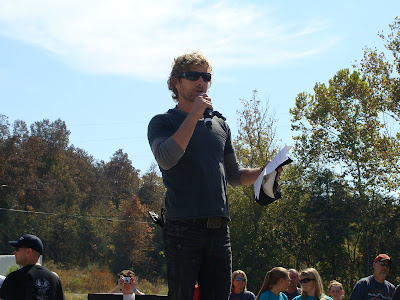 After annoucements, they were walking toward the bikes and I tried one last time to get a pic with D, but it wasn't meant to be. Oh, he took a pic with me, but I forgot to take it off zoom! It's not like I don't have umpteen photos with him, but this day was a special event.

Once the riders were on their way, we drove to the Riverfront and found the VIP tent, which was serving Mexican (what else?), and ice cold beverages. We took our chairs up to the side stage and watched all the performers. How surprising and refreshing to see Dierks' band-mates playing for some of the artists! Even Dierks himself came out several times to play guitar in the back part of the stage. 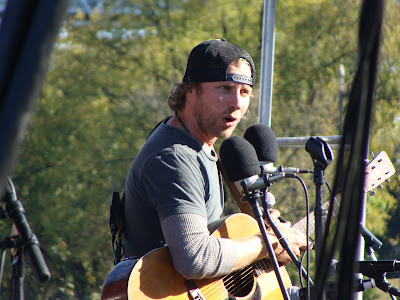 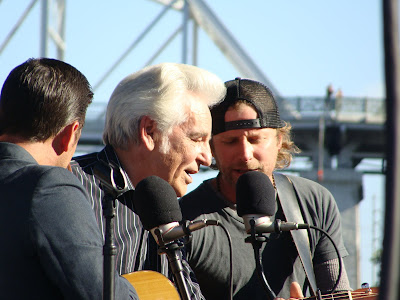 On a few occasions he stepped to a microphone and joined in the singing, too! Special thanks to Jayme for taking pics with my camera since she was in the front row! 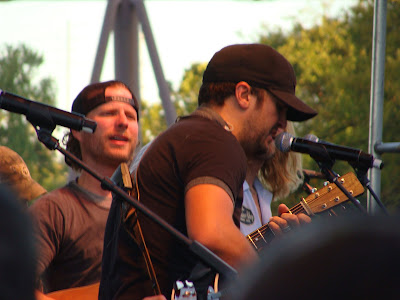 Dierks and Luke Bryan go Fishin' In The Dark! 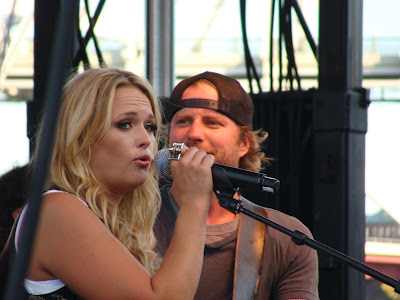 Dierks and Miranda team up.

Then he did his own set, beginning with "Lot Of Leavin' Left To Do," where he changed the lyric to "There's at least another million miles under these old 'bike" treads," instead of 'bus'. All the fast hits followed, as he catered to the bike-enthusiast crowd: 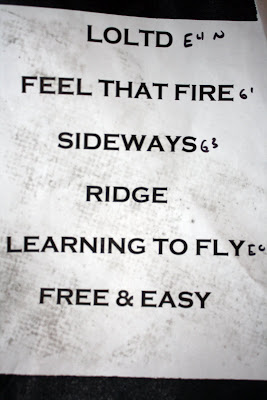 Tom Petty's 'Learning to Fly' was covered creatively by Dierks and Mat Kearney, and What Was I Thinkin', while not on the set list, is always a given staple of a Bentley show! The Up On The Ridge arrangement was, well, WOW! Steve was rocking out on those drums! 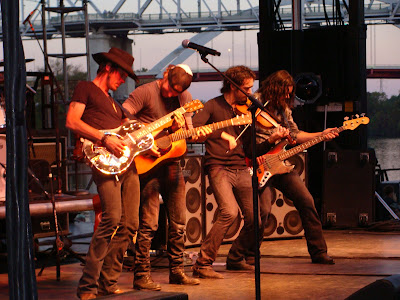 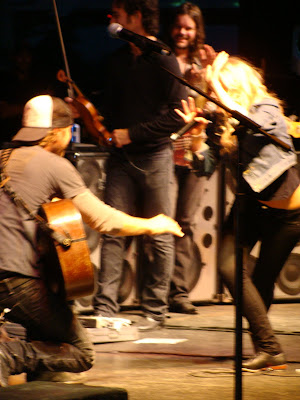 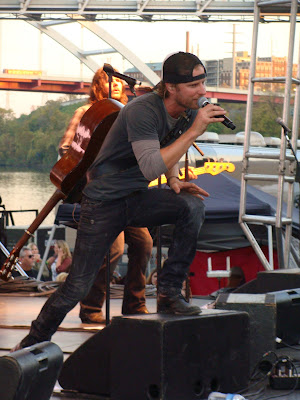 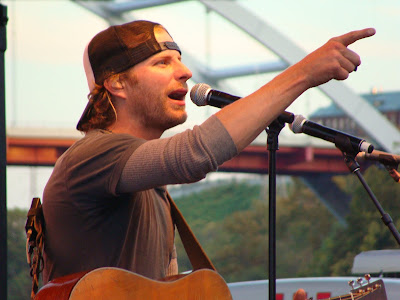 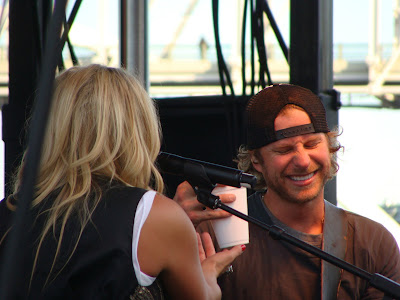 
Bad Angel was a treat since Miranda was there, and they added Jerrod Nieman to fill in for Jamey Johnson's part. 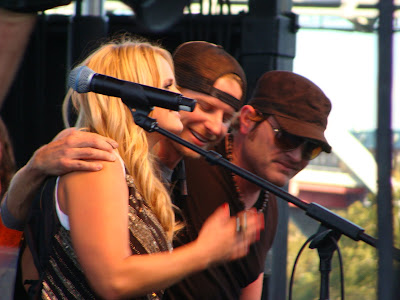 In between artists, we meandered in and out of the VIP tent and we saw people like Ray Scott, Tim Sergent (steel/banjo), and Brian Layson (lead guitar). At one point we were asked to stay inside the tent for a minute--what? Then Dierks walked by on his way to a Meet & Greet a few yards away. He waved and said hi. 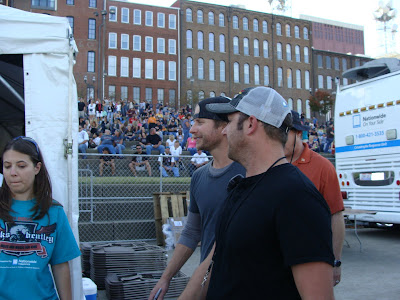 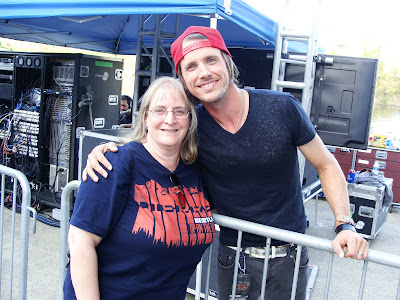 I saw Brian and asked if he'd take a pic and he agreed!

Dan Hochhalter, Dierks's new fiddle player, came out before Miranda performed to say hi and take a pic (thanks Brit!). Thanks, Kristin for finding me and taking the pic! We told him how happy we were to finally have a fiddle player in DB's band! It was great to meet the new guys finally! Next time--Cassady! 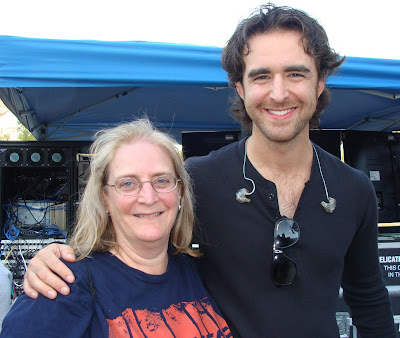 The big moment of the day came when the kids presented Dierks with the "check." He gladly signed below the $250,990.62 amount, "On behalf of C & W fans and motorcycle enthusiasts, Dierks Bentley." 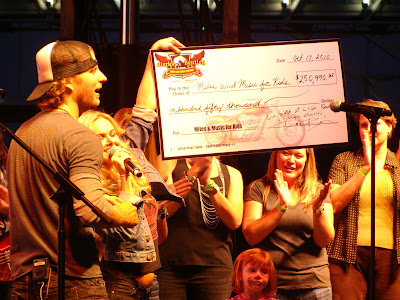 After the concert I noticed a couple dozen fans by the fence and decided to take my chances again. Dierks did come up to the fence and signed for a few minutes and I was able to get him to sign some CD covers, but again, no time for a pic--wasn't meant to be. Dierks never ceases to amaze me, though. Chris had the car running, waiting for Dierks since he had to be at the airport at 5 am for NYC the next day. A few fans were disappointed. One girl yelled, "Dierks, it's her birthday and she didn't get a picture with you!" Dierks got out of the car, came back to the fence, smiled for the camera and off he went! How many artists do you know that would do that? I can only think of one. Dierks Bentley. 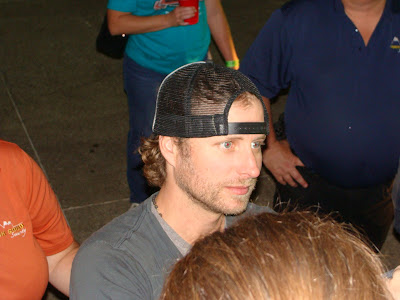 If Dierks' feet never touched the ground once the caravan of motorcycles started on their mission, my mind never left the clouds. It was a beautiful day in so many ways! Great music, great friends all coming together for a great cause! 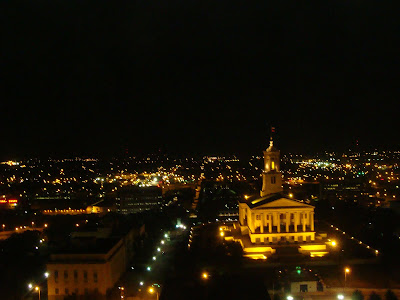 The Capitol Building at night from my hotel window.