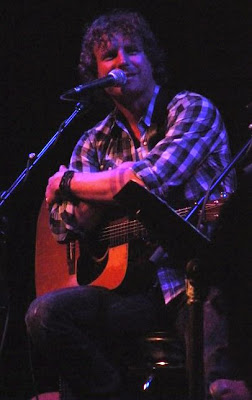 Songwriter's showcases are always interesting to go to. I was really excited to hear that one of these would be part of Dierks Bentley's NYC residency! For this one, Dierks invited Jon Randall Stewart, Jessi Alexander and Jim Beavers.

Joe's Pub was the perfect setting for this show. The building is so small and intimate that you almost miss it walking by outside. Inside there are tiny tables set up all around the stage, some couches and then a bar area behind that. The lighting is pretty low and like most small venues made for songwriter's showcases, the biggest rule is no talking while the artists are performing.

The show was pretty casual straight from the beginning. When you get Dierks and Jim Beavers in the same room, there are guaranteed to be some laughs. They have a great banter between them on stage. Up On The Ridge producer, Jon Randall Stewart and Jessi Alexander seemed to anchor down the more serious part of the evening...probably a good thing they were between Dierks and Jim! Each songwriter took a turn telling the story behind each song and then giving their rendition of it. The songs ranged from unreleased originals to ones made famous on radio by artists such as Billy Currington, Gary Allan, Reba and even Miley Cyrus (Jessi co-wrote Miley's country crossover, 'The Climb' and performed an amazing version of it). 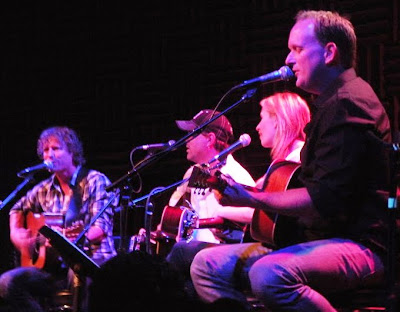 My favorite part was when Jim did his song 'Diamonds Make Babies,' a really funny song about how getting married leads to having children. He did a little poking fun at Dierks before that one since he has baby #2 on the way. Now that I think of it, there were quite a few songs about babies/children/married life. Another highlight was hearing Dierks and Jon perform 'Draw Me a Map' together...so good acoustically!

Once the show was over, the tailgaters were gathered outside and continuing the party. Low and behold, out of the venue comes Dierks to join in on the party and get his picture with "Will Ferrell." Before it got really crazy, he hopped in a cab (with a random fan trying to join him...bad idea) and left the crowd to dance to his biggest hits. A little bit later the party was shut down by the NYPD...only to be continued the next night in Brooklyn!

Thanks for sharing your in-person experience, Steph! Later, Dierks tweeted the following:

"will ferrell @funnyordie is following me around.. tailgating and playing my songs outside Joe's pub!" 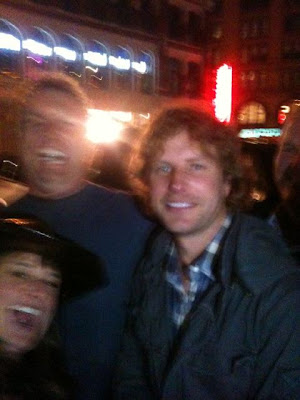 One more blog to come in this series...Day 4: Brooklyn's South Paw with The Punch Brothers!
Posted by DB Congress at 8:13 PM