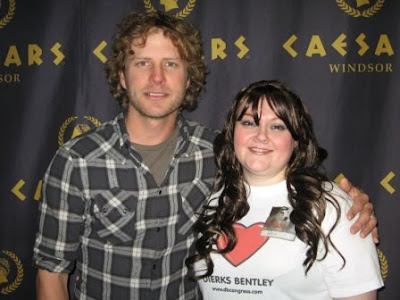 Tania Pomerleau joined the Dierks Bentley Congress (fan club) a little over a year ago and immediately requested to be a DBC rep and Lobbyist for Ontario, Canada. It was difficult to find Dierks CDs in the stores in the Great White North, so a couple of other DBC members sent her a few CDs to help complete her DB collection.

Tania had never been to any concert and she wanted Dierks to be her first. She had never met Dierks either, but here she was promoting him daily through the DBC! Her luck was yet again challenged when the DB Tour date was announced for October 22 in Windsor, Ontario. Tania had issues with logging in to dierks.com and her fan club membership to request a Meet and Greet. Another fan-clubber came to her rescue and she was finally able to login and apply.

Her luck was about to change. She won her first Meet and Greet!

"I had a great first concert experience last night. My friend and I got there and waited to get into the meet and greet. I almost lost my M&G pass just before going in, but I found it stuck to my Dierks Bentley poster, thank God!

I had made a special T-shirt to wear for the night since I hadn't received my DBC shirt yet. He said he really liked it, and I got him to sign it for me as well as the special 18 x 24 inch poster I had made. The poster was done on the back of another poster because I didn't have poster board, so Dierks asked who the other band was.

Dierks was a sweetheart, I'm so glad I was able to meet him! Dierks played my favorite song, 'Free & Easy.' This song has been my theme song for the last five years helping me through hard times. I loved watching him play on that stage--he was so much fun! I've now caught the concert bug! I had a smile on my face the whole night. So glad Dierks' concert was my first!"

Another DBC rep, Stacy Baker from Michigan, also had a M&G with Dierks that night--her second time meeting him. "It was such a great concert. I had front row so I was at the stage the whole time. I'm having Dierks 'let down' now since I don't know when my next concert will be! My husband's friend took pictures for the local radio station at the concert. We were standing by him, so you can see we had an excellent view."

The photographer Stacy refers to is Steve Wiseman from one of our favorite radio stations: CBS Radio 99.5 WYCD in Detroit, Michigan! They are huge Dierks and DB Congress supporters! Below is just one sample of his work. 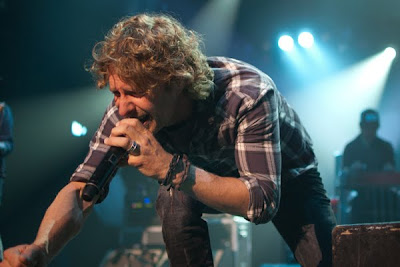 Steve shared his link to the all the photos he took that night at The Colosseum at Caesars Windsor here.
Posted by DB Congress at 12:07 PM