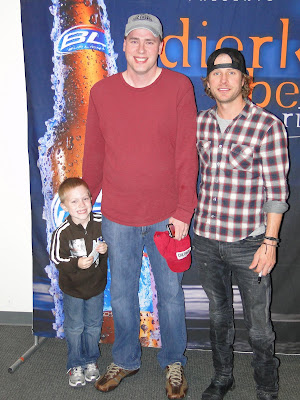 Clint Bond, aka DB Congress rep CMB7869 from Kansas, bought a fan club membership for his son, Chase, when he heard Dierks was coming to his city, in hopes of winning the 5-year-old a Meet and Greet with the man himself. His hopes turned into reality.

"He is pretty shy so once he realized we were meeting Dierks he started hiding," Clint told me about Chase. "He plays Rock Band all the time and the only songs he likes to sing are: Free and Easy, What was I Thinkin' and Ghostbusters. He really likes Dierks but this was the first concert in the area for a couple years that wasn't 21 and over.

Once Dierks got there, Chase got really nervous. He had been planning on what he would say but once he got up there he got nervous. Dierks was really cool. Gave him a high five, asked what his favorite song was and everything. I was able to get Chase to take a picture with him. Dierks told him after he said that Free and Easy was his favorite song that he would play it just for him."

"Dierks was of course awesome last night," Clint said matter-of-factly. "I tried to get some videos of songs I didn’t already have. I got him doing 'Rebel Yell' which I had never seen him do before, even though I did know he loves Billy Idol."

Before 'Rebel Yell,' Dierks told the crowd: "Remember that first concert I was telling you about? I'm gonna take you there."

We've been waiting years for DB to add a fiddle player to the band! Check out Fiddlin' Dan Hochhalter playing a killer 'Fiddlin' Around':

'Wish It Would Break' is probably my all time favorite. Glad D has been adding it to the set list lately:

Thanks, Clint, for the sweet story about your son and for capturing these rare memories on video!
Posted by DB Congress at 11:12 PM