Dierks Bentley Performs "I Hold On" on The View on ABC

"You didn't think we were gonna let Dierks Bentley leave here without singing his hit song that will be, I think, the country music anthem of the summer, did you?" teased Whoopi Goldberg on The View this morning.  We sure hope it's a hit, Whoopi!

After 24 hours of hints, Dierks debuted his newest single from the upcoming album, Riser.  "I Hold On" has been a DBC rep favorite since his first Locked and Reloaded performance of the autobiographical song in January.  It is his most personal composition to date, co-written with Brett James.

Dierks was to co-host The View, but he didn't get much talk time.  Alison Bonaguro said what we were thinking:

Jake, DB's part Spitz and part one-night-stand dog, fit right in with the theme of the episode--The 5th Annual Mutt Show.  Dierks thanked Southwest for being so nice to fly Jake to NYC: 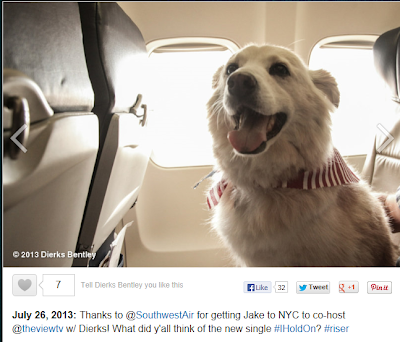 While we have to lay "Bourbon In Kentucky" to rest for now (radio didn't get behind the melancholy song so Capitol opted to go with something more up tempo), we will rally behind this new Riser cut and request radio DJs to hold on to this summer song like Dierks holds on to all the things he loves.

Watch Dierks and the guys perform, "I Hold On."


After he sang, The View ladies did give him a chance to talk about raising over $500,000 for the Prescott Firefighters families, but it felt rushed and like an afterthought--would have been great conversation for the couch!  Just sayin!

As soon as we find out when "I Hold On" goes to radio and when it will be available digitally, we'll let you know asap!