#1 Plaques and 2 Quarts of Patron

@DierksBentley: headed to my #1 party for AM I THE ONLY ONE. thinking about all our hard core fans out there that made this happen. love you guys.

@DierksBentley: been waaaaay too long since I busted the '67 camero out!! perfect day to do it. headed to the party. thx again for calling Country Radio

The party, held by Capitol, BMI and ASCAP honored Dierks for performing; Dierks, Jim, and Jon Randall for writing; and Team Lonesome for the roles they played in the AITOO video. When Dierks was honored by ASCAP, Evie (who is getting so big!) joined him onstage to accept the award. 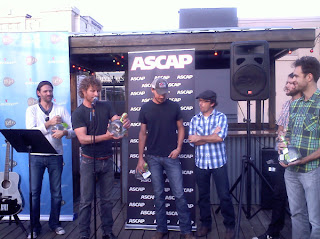 (Photos courtesy Nashville Country Club)
The writers, promotion team, and Team Lonesome were all awarded with 2-quart bottles of Patron.

“This is the first No. 1 that I’ve been really excited about the party and the actual location of the party,” Bentley notes. “[In the song], we wrote ‘I was flying solo / Down at Silverado’s / The joint looking like a morgue.’ Anyone who’s lived in Nashville as long as I have knows what Silverado’s is — it’s the one bar that used to be opened on Sundays. I was really excited to have the No. 1 party at Silverado’s … just have it be a crazy No. 1 party, but Silverado’s is closed. I wanted to have it there, but this is a great spot and is easy for everyone to get to. I don’t get to come here as often as I’d like because I’m on the road, so it was good second choice.”

Congratulations once again, Mr. President! We can't wait to do it all again in a few months - for your 9th #1 single "Home" AND your next #1 album!

Email ThisBlogThis!Share to TwitterShare to FacebookShare to Pinterest
Labels: #1, Am I The Only One, ASCAP, BMI, capitol records, Dierks Bentley, Team Lonesome