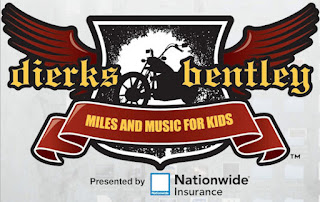 Over the event's six year history, it has raised $1.6 million for children's hospitals in Nashville, Phoenix, Dallas-Fort Worth, Atlanta, Seattle, Columbus and is also slated to stop in Chicago on Oct. 9.

The hour-long motorcycle ride will once again kick off at the Harley-Davidson in Columbia, Tenn. and end at Riverfront Park in downtown Nashville with a concert featuring Bentley and special guests including Eli Young Band, Colt Ford and Josh Thompson. Other artists will be added to the bill.
Tickets for the family-friendly event go on sale on Friday, Sept. 9 through Ticketmaster. Tickets for the ride, concert and commemorative T-shirt are $50, or those looking to attend the concert only can purchase tickets for $20. Sponsored by Nationwide Insurance, all proceeds from the Nashville event will benefit Monroe Carell Jr. Children's Hospital at Vanderbilt, a Children's Miracle Network Hospital.

In 2009, Bentley joined forces with Nationwide Insurance, CMT ONE COUNTRY and the Children's Miracle Network to take the successful "Miles & Music for Kids" benefit on the road, and has since expanded to visit six cities.For the latest news and ongoing artist announcements, visit www.dierks.com.
Posted by DB Congress at 9:47 PM