The Spokane M&G was sort of sparse. "It was kinda sad because only 4 fan club members showed up! They said they took 15 M & G envelopes to Will Call and only 4 of us made it down there," said DBC rep, JackieDee from Montana. "It was me, Holly, and two other girls. On the bright side we got a couple extra minutes talking to Dierks since there were so few of us! We actually were the last group to meet him because they wanted to give the fan club members as much time as possible. 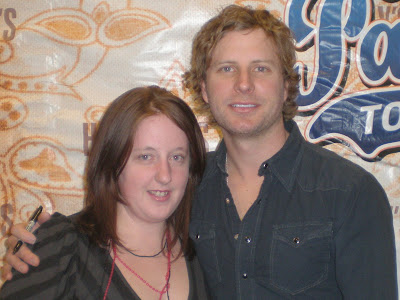 We talked about the new album and he asked us what songs we liked. I found out that one of his favorites on the cd is mine as well (Better Believer). We talked about Brad's show and if any of us had seen him before. He told us that this year was mainly about getting out there and playing lots of shows to support the new album. He was so awesome as usual! He is hands down the nicest, most sincere country artist I have ever met. He appreciates us fans so much!" Fellow DBC Montana Rep, Cntrychik, was one of the fan club members who missed the show and the M&G, "because I got caught in the worst white out/winter storm I've ever been in outside of Missoula! Needless to say we tried everything possible to get there - checked into flights/bus/train, etc., but nothing was cooperating that day! To say I was disappointed is definitely an understatement! While I like Brad Paisely, I definitely was going for Dierks and I had soooooo looked forward to it!"

Jackie's avatar on dierks.com is from the July 4th Missoula show in 2008. "He grabbed my camera at the end of the encore and snapped a pic! That was probably the coolest thing to happen to me at a Dierks concert! I actually showed him that pic at the M & G and he said he remembered doing that and he remembered that show well."

On to the show..."The concert was a blast! I got 3rd row right by the middle catwalk thanks to Brad's fan club--awesome seats! Dierks' set was great, I just wish it was a little longer! I loved hearing "Sideways" live, its such a fun and upbeat song! I can't wait for that one to be released to radio (official release is March 2, but many stations are already playing it)! I loved the cameos by Dierks during some of Brad's videos on screen!" 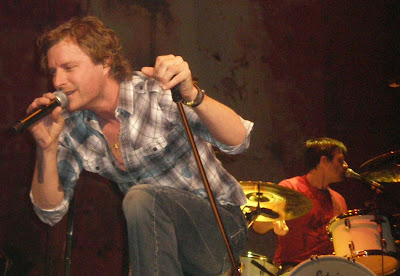 Two days prior to the Portland show, Kyle O'Brien wrote an article for The Oregonian. I pulled out some of the quotes from Dierks that I thought were especially nice:

He remains connected to his fans through the Internet, thanks to that site (www.dierks.com). There they can find Bentley's blog and his message board, plus personal videos from the road and the recording studio.

"I'm trying to make the connection as real as possible for the fans. With my Web site I reach a much larger audience. We have videos and fun stuff going on behind the scenes."

That kind of transparency takes down the wall between fans and artist. Bentley is grateful for their interest.

"I think there's a real connection there. When I do meet-and-greets, I'll sign anything you want, I'll take pictures and we'll have a chance to talk and share some stories. ... When I get a chance to do something real, I want it to be real. Keeping that connection with the fans is important, and I love doing it. They're taking the time and making that investment in supporting me. I don't want them to feel betrayed."

"Wow, what a night in Portland!" exclaimed Oregon DB Congress rep, Jules44 (Julie). "First we all had Meet & Greets, four of us, THREE generations of fans having one-on-one's with Dierks once again! 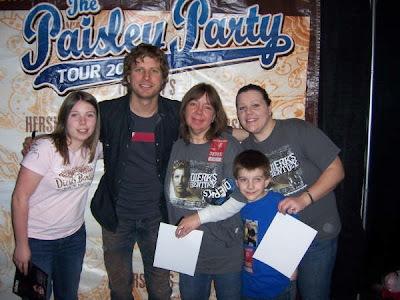 L to R: Daughter Kayla, Dierks, Julie, daughter Amanda,and grandson Camden. He's a fan club member. (justakid). The picture below was taken by Cam and Dierks posed only for him. 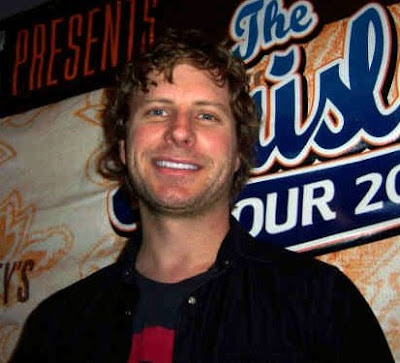 Then we truly enjoyed the concert. We were in row 11, right behind the left catwalk. It was an awesome, albeit short show as far as Dierks was concerned, about 45 minutes I think. First Crystal Shawanda performed then our guy boomed out with their new backdrop and old and new songs and the guys were all looking great and performed at their best.

Dierks first appeared in classic plaid and curls, ah the memories! Then later he wore a shirt with a big "7" on the back. "7" was our lucky number last night because my grandson turned 7 last night after midnight and it was also his 7th concert.

The Rose Garden was packed and the fans and all the excitement had Dierks saying, "Man, I LOVE this!", as he walked down the catwalk. He really gets going when the fans get going-how can we NOT get going with talent like that!
Brad was next and I'd never been to his concerts--really I only go see Dierks--but it was exciting and he incorporated Dierks into his concert/music. I don't want to spoil the surprises for the following concerts, but Dierks will be back at the end of the show, Crystal too."

Future DBC Oregon rep, kathysue, was also in row 11--on the right of the cat walk. "Great seats and surrounded by Dierks fans," she confesses. "I thought Crystal was really good and her "Daddy Let Go Now" song brought some tears to the audience eyes. She rocked and then our man Dierks was amazing and worked the crowd. Everyone just loves Dierks! You can tell by the reaction from the audience. Even when he came out at the end everyone was like "DIERKS!!!" I think he alone could have filled the venue. I wished he would've sang "Pray" or "Beautiful World." Those are songs people really need right now but I get why he sings the more upbeat songs to get the crowd going for Brad. "Sideways" is a definate crowd pleaser. It was fun to meet some DB fan club members."
=========================================================

DBC Washington Rep, Beth (PuyallupGal)arrived at the Varsity Grill around 1 p.m. "The Wolf was hosting a pre-show party with Dierks "hosting." Or at least that's what we were told, among other things. Around 6p.m., Dierks arrived, they gave away meet & greet tickets as well as tickets to a private performance. We were all told that he'd be signing after that. But not so much--Dierks quickly ducked out and headed back to the Dome for the show! The only bummer was the wasted afternoon sitting in a bar."

The show..."Crystal Shawanda kicked things off with a 30 minute set. She's an absolutely adorable girl & sounded great. Finally...Dierks! Now, I have seen a lot of concerts at the Tacoma Dome from The Backstreet Boys, George Strait, Ronnie Milsap, Kenny Chesney, Tim McGraw, etc. Seeing Dierks play for a few hundred people in Elma, WA and then seeing him play on stage at the Tacoma Dome to a full house on their feet was just plain awesome! Even though it wasn't HIS show, just seeing him play that place makes me so happy!"

"It has been quite sometime since I've seen the guys, July to be exact, but they sounded amazing! The Tacoma Dome is generally notorious for horrible acoustics but the boys just rocked that place! I was afraid people would be sitting but they were up on their feet from start to finish & it was an awesome thing to see. He played about 8 songs or so and I think my favorite tonight was 'Sideways.' Love that song & it is so much fun at a live show. His 45 minute set was WAY too short. I could have gone for a few more hours of music. I didn't really get any pictures as I a) forgot film for my good camera and b) my digital completely died on me. I think my BlackBerry took better pictures anyway! LOL I did stick around through most of Brad's set to catch Dierks during 'Alcohol' but after that I took off in order to beat the mad rush.

They put on an amazing show. They just never cease to amaze and sound better and better with every performance!"
Posted by DB Congress at 3:10 PM