DIERKS AT THE GRAND OLE OPRY! 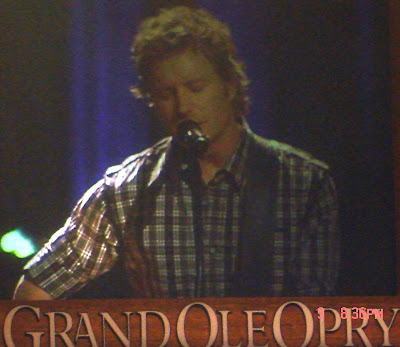 Dierks Bentley will be performing at the upcoming March 21 Saturday night Opry and the Tuesday night Opry on March 24 in Music City (Nashville, Tennessee) at the Grand Ole Opry House. Other artists scheduled include:

He became an Opry Member on October 1, 2005. Here's an excerpt from The GOO website:

"From his early days in Nashville as a researcher at TNN, Dierks has had incredible admiration for the Opry and its members. In fact, he was such a fan in those days that the Opry's General Manager Pete Fisher had to go as far as limiting his backstage access making Dierks’ induction this week as the youngest member of the Opry a true benchmark in his career. “It’s like having a home off the road and a place you can always go to play music in town,” Dierks says about his new status as ‘Opry member.’ “The Opry is such a huge part of American history. It’s bigger than just country music. It’s a big reflection of our country.”

Get your tickets now at www.opry.com!
Posted by DB Congress at 11:31 PM