Jasper Jones does justice to Sideways in his review below. I did send him a comment that Dierks has actually had six #1 songs, and I think Sideways will be #7! It slid into the #22 slot this week--four weeks on the charts! 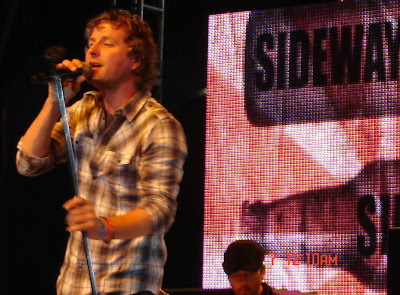 The Phoenix, AZ native, Dierks Bentley, is back with another single release from his Feel That Fire album. Dierks certainly is a country music work horse. It seems like the guy is always cranking out a new single, out on tour, releasing a new video, etc. All that work is paying off though because Dierks level of success continues to rise. Feel That Fire is his third number one country album and his highest charting album on the pop charts at number three. Plus, five of his last ten singles have reached the number one spot. Whatever Dierks is doing, he's doing it right.

"Sideways" is the second single from Dierks Bentley's sixth studio album, Feel That Fire. It's an up-tempo country club number about keeping the chicks on the dance floor, getting drunk, and having an all-round good time at the club.

A club number driven by an electric guitar and a banjo sounds like a total train-wreck, but Dierks somehow pulls it off.

The song is sure to be a hit in the country dives with its "good time" feel and its sing-a-long chorus. If his last single "Feel That Fire" made it to number one, the far superior "Sideways" is a shoe-in.

Favorite Lyric: "Ain't no need to fight/ y'all take that redneck stuff outside/ that's what parking lots are for."

Rating: 4/5 - Country music isn't always about patriotism, God, or broken hearts. It can have fun too, and "Sideways" is a prime example.