One of our Band of Brothers representing Washington in the DB Congress goes by the user name "that_duck_dude." According to Layne (his real name), Dierks' short set was "packed with all of his hits and high octane numbers."

Even still, the entire evening at the Sundome was spectacular. "I am actually glad that I decided to see the show in the Sundome because it "only" seats about 7500. And can you believe the concert wasn't sold out? Really?"

With row 13 tickets and Meet & Greet passes in hand, Layne met up with other DB fan club members. "Everyone was so friendly," he recalls. "And I was the only dude so I kinda felt special. We were taken to a small...and I mean SMALL room that must have been a 100 degrees. It was like a sauna and hotter than Hades. When Dierks walked in he immediately commented about the heat in the room! We all had a good laugh about it." Dude, it is the "Feel That Fire" tour, right? 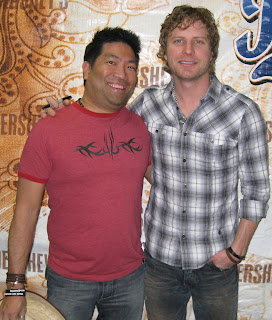 Dierks knew he had met me before and couldn't remember my name, so I told him and he then repeated it a couple more times. I had him sign my cd and my Cowboy hat. I also showed him the shirt that I made using the Dierks tattoo template and on the back it said "Dierks.com". He thought it was a really cool shirt. I picked a red shirt and it was funny that the "Feel The Fire" tour shirt is red! He went around and hugged everyone before they left, including me, and said "Thanks Layne" so that was cool.

The seats were amazing and it looked like the first 6 seats next to the catwalk were for Dierks fans. You could actually reach up and touch the catwalk. Cool. Dierks' set opened with the video of him in the bar meeting the girls, but then has to go on stage which led to the opening number, "How Am I Doin'." Even with a 45 minute set, he did manage to sing "Feel That Fire" and "Sideways." Before breaking into "What Was I Thinkin'," he was sitting down at the end of the center catwalk (right in front us, I mean he was RIGHT THERE) eating some guy's popcorn and drinking beer before he started singing WWIT. Awesome. He closed with "Free and Easy" and got the entire Sundome crowd to sing the chorus. 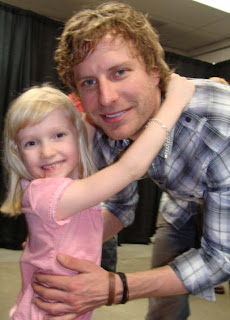 Miss Ellie is a beauty from south Yakima, Wa. That's a long way from Alabama, but she snuck out one night (with mom Stacy) and met Dierks by the front gate of the Sundome. This was to be the 5½-year-old's first concert, "but she was way more excited because she got to meet Dierks!" exclaims Stacy. "He was very sweet to her and she was over the moon! It was HOT HOT HOT in the meet and greet room! My favorite part was when she asked him if he was going to sing "Country Roads (Every Mile a Memory)" and he sang some of it right there! Thanks Dierks! Another great concert! Hurry back! Ellie wants to meet you again (her exact words) GOD BLESS YOU! 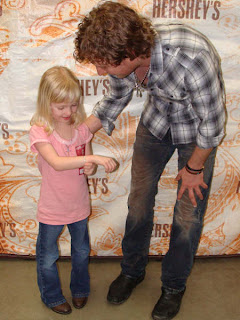 I am not quite sure what she was telling him at that moment (photo at right). I was trying to stay out of the way and Chris took that picture. It was so neat seeing it through her eyes...her very first concert and she got to meet Dierks Bentley!!! She is still talking about how he sang to her, said she was cute and that her name is pretty! Her bracelet is a charm one that her daddy gave her when he took her on a date a few months ago, there are 2 hearts on it one with her name, a star and a cross." Stacy was wondering if there are DB Congress shirts small enough for Miss Ellie (we'll check on that). How about a little white tank top?
=====================================================================================
DBC rep Holly, from South Dakota, shares her 4-peat experience: "This was night #4 of 4 shows in 4 days. I was feeling very sad and wanted to make sure that this show was the best one to have the awesome memories to hold me over until I get to see Dierks and Brad again. I got second row tickets again thanks to Brad's fan club. Well Dierks made my night. As he comes on stage, he scans the crowd and sees all 16 of us who had come from all over the U.S. to all four shows, and he holds up 4 fingers. Then during "How Am I Doin'" he takes my hand and sings to me. When he gets to the part were he introduces himself he looks into my eyes and says, "I know you already," and I tell him, "Yes you do." I'm glad a few of my friends thought to take some pictures of this. The show was amazing. Thanks Dierks for again making me feel like I was the only one there."
Posted by DB Congress at 9:43 PM