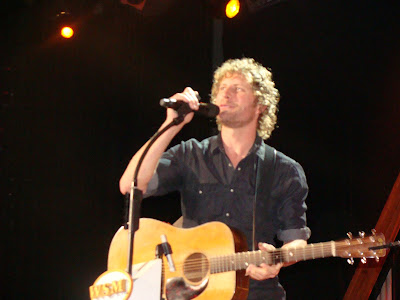 Dierks Bentley will host a one-hour weekly radio show for 650 WSM AM beginning March 15. Every Monday at 2 pm central, Dierks will kick off a series of new midday shows hosted by award-winning artists. The three weekly one-hour shows hosted by Dierks, Pam Tillis and Jim Lauderdale will air Monday through Wednesday at 2 p.m. CT. The shows can also be heard online at www.wsmonline.com or as podcasts via iTunes.

CMA award-winner Bentley leads off on Mondays with his show "The Thread." Here's what Dierks had to say about his new DJ responsibilities:

"650 AM WSM is a country music institution...I can't believe they are turning the controls over to me for an hour every week...it's the most fun I've had in a long time. Putting this radio show together is the most fun I’ve had in a long long time. I named it ‘The Thread' because it's my chance to go back to all the music that influenced me...it’s the artists and songs that tie us all together as a genre. I get to pick the music, tell stories and do just about whatever I want with that hour...it’s anything goes."

"We look forward to having these diverse artists as part of the station line-up," WSM Operations Manager Joe Limardi said. "It'll be exciting to listen to them taking their turn on the other side of the microphone, stepping into the shoes of renowned station DJs that have filled the airwaves for 85 years. WSM continues to be on the cutting edge of programming like no other radio station in the country through digital media and an expanded playlist to encompass 'all things country.'"

650 AM WSM's first official broadcast day was October 5, 1925. The station is the radio home of the Grand Ole Opry, which has been broadcast live over the airwaves since its inception. WSM can be picked up in 38 states on 650 AM and worldwide on www.wsmonline.com.
Posted by DB Congress at 5:17 PM