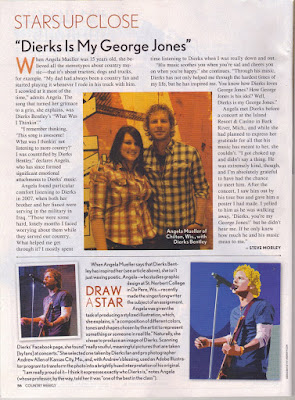 You may remember the "Dierks is Her George Jones" blog I did back in December 2009. Well, I thought it was such a powerful story that I emailed it to Steve Morley at Country Weekly, thinking it would be great for the "Draw A Star" section. He loved it so I put him in touch with Angela Mueller, DB Congress rep from Wisconsin, who created the Dierks Bentley illustration from Andrew Allen's photo, for her grahics design class.

True to his word, Steve featured Angela's artwork in the March 22, 2010 issue of Country Weekly magazine, page 56. Not only that, but he gave the story the entire page of Stars Up Close!

So Steve, you are our DB Congress honorary DBC Rep of the Month! Thanks so much for all your Dierks and DBC support! It means the world to us!

As for the rest of you readers, please go out and buy the March 22 issue and show your support for Country Weekly! You might even want to send a "thank you" email to Steve!

Congratulations, Angela! I know you're on Dierks Cloud #9!