TRAIN'S A COMIN', IT'LL BE HERE 'FORE TOO LONG 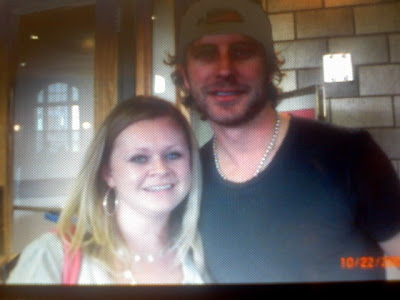 Have you ever done anything crazy to meet Dierks Bentley? For one DB Congress rep, what might be considered crazy to some people, was just 'trying her luck' to Michelle from Maryland.

It was October 22, 2009, and Dierks had posted a message on Twitter that he was getting ready to board a train from New York to Baltimore for the show that night. So Michele begged one of her friends at work to go to the train station with her so she could get a picture taken with him. 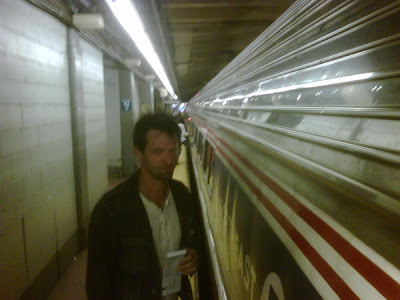 "Let me start by saying, I am not a stalker! I follow Dierks on Twitter and he said he was taking a train from New York to Baltimore. I checked to see when the train got in and went to the train station."

She knows that may sound crazy but it was only a few blocks from the train station in Baltimore where she works so she thought she'd try her luck.

"I finally got a girl from work to go with me since no one I work with likes country music. We were at the station for about 10 minutes and my friend said, "Oh my God there he is." When I turned around, I almost died. It was like a movie scene in slow motion (in my head) [every song another scene, from some old movie goin' back in time to you and me...]." Her friend asked, "What do we do?"

Michele, not about to waste this opportunity, grabbed her arm and walked over to Dierks. "I figured this may be my only chance to ever meet him. We got pictures with him and he was so nice to us. I was so nervous! He was with Steve Misamore, the drummer, and they were taking pictures of each other on their phones. He asked us if we were taken care of for that night's show. I'm not sure why we said yes. I was so excited I didn't even think to tell him we didn't have tickets for the show! I'm never lucky enough to get M&G passes, so I had to take matters into my own hands! I'm so glad we went and I'd do it again if I had the chance!"

Michele is hoping to win a M&G through the fan club for the May 19 Baltimore show! Well, Michele, seems like your luck is changing! But we're crossing our fingers for you just in case!
Posted by DB Congress at 8:20 AM