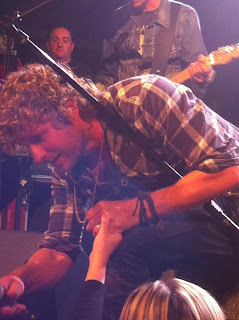 "I used to hate country music. I live on Long Island and pretty much no one here listens to it. Then I went to school in upstate NY and was surrounded by it. I still was not a fan though.  Then during my spring break I went on a trip with a group of students to Louisiana to help and clean up from Hurricane Katrina. I was going to be stuck in a van for about 25 hours each way with people that listened to nothing but country music. I was not looking forward to it.
But then I found myself starting to enjoy the music that was playing during the ride down. One of the songs that played pretty frequently and quickly became my favorite was this one called ‘What Was I Thinkin’ by this guy named Dierks Bentley. On the ride back up to school I was getting high-fived for knowing artists to certain songs. And when we were back home I went out and bought Dierks Bentley’s first two albums. I was hooked. I could not get enough of his music – or any country music. I even ended up seeing Dierks in concert which was my first country concert ever.
I recently was able to see all four of his NYC shows. During the first night I was lucky enough to have Dierks sing to me! I was wearing a long sleeved shirt over a white tank top and he even took off my long sleeved shirt!


I am now a huge country music fan and I credit Dierks Bentley for being the artist who first really got me to realize just how great country music is.

I will be seeing him again in March. Can’t wait for his new album! By the way, in the past month we just got a country radio station on Long Island so hopefully Dierks will soon have a whole new group of fans!"
Posted by DB Congress at 7:27 PM