Dierks Bentley: 'I make decisions on the fly' 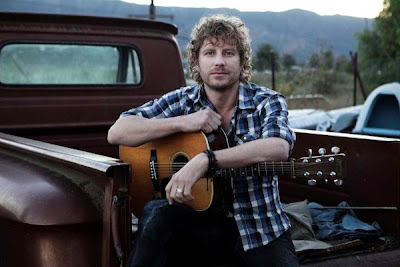 Dierks Bentley: 'I make decisions on the fly'

Dierks Bentley has built an enviable country career with songs that range from toe-tappers to sultry ballads. But last year he threw country music for a loop when he stepped out of his commercially viable comfort zone and into the world of bluegrass with the album Up on the Ridge. The record has been a critical coup, resulting in the best reviews of his career and multiple awards show nominations. At the Grammys, the father of two is up for three awards, with two nods in best country collaboration with vocals and a mention in the best country album category.

• (Up on the Ridge) wasn't a career move. It was just a record of passion. In the country world, there's a lot of fluff that goes on and it can be more about the game than it is about the music. And this was a chance for me to work with the musicians I love and write songs we love.

• I stepped off the escalator of country music and just did something that didn't make a lot of sense to anybody.

• When I looked back on what I learned making Up on the Ridge, it is what a great town Nashville is. To make a record like this and have it be nominated for CMA album of the year and be No. 1 on the bluegrass charts for several weeks and be part of the Grammys, just all the love I've felt has reminded me of why I love Nashville so much and what a great town this is to be creative in.

• I make decisions on the fly without thinking about the implications.

• I always wanted to make a bluegrass record, and I didn't want to do it at the end of my career but in the middle.

• It really made me realize that my music has always been a blend of both of those (country and bluegrass) worlds.

• Writing for me changes with every record.

• There are some guys in town that are really smart and have it all figured out. They find two or three people and they write songs with them and they save a lot of time just writing with the same people over and over again. My style of writing is more like a shotgun blast. I write with all sorts of people, maybe they've had hits, maybe they've not.

• I probably have written more songs on my albums than anyone I know except maybe Taylor Swift. But I really discovered making the Ridge record that it's fun to listen to other songs, and I enjoyed it. There are a lot of great songs out there, and I just wanted to find something that complements the (next) record and works well in the framing of what you've already written. So I really have reached back into the community.

• Someone told me a while back, make sure you pick a hit you can live with because you're going to sing it the rest of your life.

• I think we set a model from the beginning that a lot of people followed, which was touring and touring hard and even passing up some big tours opening for 30 minutes and instead going out and playing two and a half hours in small bars. We really liked the audience in our face and being part of the show. It made us honest.

• It's the biggest cliche in country music, but the fans are my biggest takeaway. You try and not take yourself too seriously with what you do, but I take myself really seriously when I'm on stage. I know that people are there because this music is part of their lives.

• I try to avoid looking at people as part of a label or as part of a call sign for a radio station. I just like being around good people.

• I love the fact that I can be a man and be a little boy. I get to go on the road and play Xbox with the guys in the band and drink beers and play music and rock out, and then I get to come home and have a real life with real responsibilities and be a father. A man can still go be a boy, but a boy can't go out there and be a man.
Posted by DB Congress at 12:25 AM

Email ThisBlogThis!Share to TwitterShare to FacebookShare to Pinterest
Labels: Cindy Watts, Dierks Bentley, make decisions on the fly, The Tennessean