When searching for any mention of Dierks Bentley's name on Twitter tonight, I found this:

"@DierksBentley's "What Was I Thinking" is featured in our new #wii #dance game, @Country_Dance. Just 1 of 27 hot #country songs in the game!" 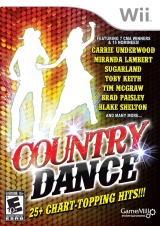 Country Dance lets players dance along to some of their favorite country tunes this Spring on Wii. Players will earn points moving their Wii Remote and replicating the onscreen dance moves as closely as possible. Country Dance allows players to customize their characters' look and challenge friends and family in a dance-off duel.

Email ThisBlogThis!Share to TwitterShare to FacebookShare to Pinterest
Labels: Country Dance Game, Dierks Bentley, What Was I Thinkin', Wii