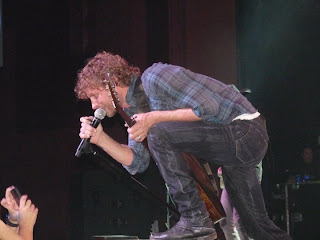 Dierks Bentley has three Grammy nominations at this Sunday's ceremony in Los Angeles including two mentions in the Best Country Collaboration with Vocal category: "Bad Angel" with Jamey Johnson and Miranda Lambert and "Pride (In the Name of Love)" with Del McCoury and The Punch Brothers. "I'm gonna split the votes and have no chance of winning," Dierks jokes. "No, it's really cool. You know, I voted and to go down and see your name twice and to kind of have to choose between one of your two collaborations is really cool."

Dierks is also playing a pre-Grammy show at The Troubadour in Los Angeles on Saturday night, February 12th, with a few special guests. Members of Lady Antebellum are expected to be on hand, and Dierks is reaching out to artists beyond country music as well. He says, "Just trying to get some different people out from different genres and see what happens and give my fans out there a unique kind of show that will never happen again. So, we're working on collaborations and making it a lot of fun."


Source
Posted by DB Congress at 7:11 AM